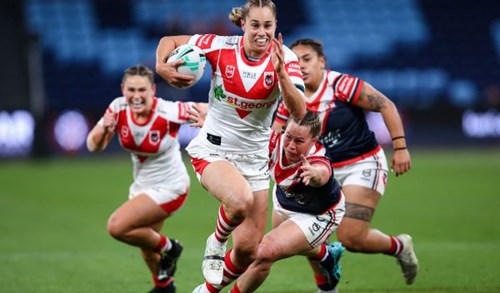 A different stadium to play on will hopefully bring a renewed attitude to the St George Illawarra Dragons NRLW team, according to Harvey Norman NSW Sky Blues skipper Kezie Apps.

Also the club captain at the Dragons, Apps spoke of the disappointment she and her teammates felt  dropping off the pace in the second-half against the Sydney Roosters to lose 34-6 after being 6-all at the break.

“It wasn’t our style of footy in those little effort areas when we had to get into that grind,” Apps said. “We switched off for a few seconds and it changed the game.

“We made it really hard for ourselves and they played really well. We didn’t play to our potential if I’m honest. I think we’ll be better for the experience.”

A change of scenery to face the Brisbane Broncos at Melbourne’s AAMI Park on Saturday may also help rejuvenate the Dragons.

There has been no NRLW games played there since the 2019 season and the Dragons were not one of the teams who played there then (Roosters, Broncos and Warriors.

“It’s a longer turn-around which is great and we’re going down to Melbourne… a bit of a road trip and different stadium,” Apps said.

“The girls have come in pretty fresh and pretty keen to put some things in place we’ve spoken about.

“After the loss we had against the Roosters the girls would love to come back and get the win, which will then put us in good stead for the finals.”

The Dragons currently sit in third spot on the NRLW ladder with a 2-1 record after three games in the five-round competition before the top-four head to the semi-finals on 24 September.