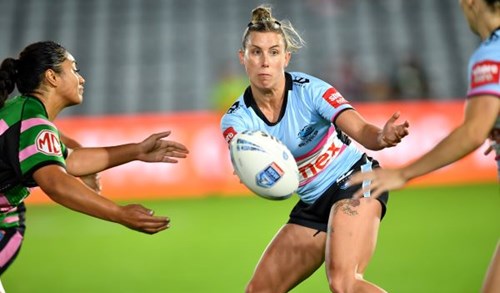 The 31-year-old mother of two announced her retirement this weekend.

And in between all that she had two children – son Reef, 3, and daughter Lakey, 1.

“She’s awe-inspiring Sam and can be very proud of blazing the trail she did,” said Hilder who coached Bremner both at the Sydney Roosters and in the Sky Blues.

“She was an extremely hard-worker, who put absolutely every ounce into her preparation.

“But when it came time to relax, Sam was the life of the party … and her teammates loved her for that too.”

She played two seasons with the St George Illawarra Dragons and then last year with the Sydney Roosters in NRLW.

Her two tries in five games in the No.1 jersey for the Roosters earned her the Dally M Fullback trophy in the NRLW “Team of the Year” and the fullback honour again in the RLPA’s “Dream Team” of 2022. She was also named RLPA “Players Champion” in 2016.

Bremner’s ability to get her body back into shape – twice – to keep returning to the elite level after having children was admired by everyone in Rugby League.

Her swift acceleration through gaps, her support play, her swerving line-breaking football were her trademarks.

She had originally planned to retire after the 2017 World Cup but being ruled out of the final against New Zealand, due to injury, brought out that stubborn Bremner gene once again.

“The fact I didn’t play that final motivated me to play longer,” she told nswrl.com.au last year before the World Cup.

“I wanted to come back after my two kids because I wasn’t done yet.

“I certainly wouldn’t have hung around for another five years if I’d played in that final.”

Hanging around worked a treat. Bremner started at fullback in the Jillaroos’ 54-4 win over New Zealand at Old Trafford last November.

In announcing her retirement on social media, Bremner said: “This game has had a huge influence on who I am and what I value in life; it has helped shaped who I am, and what I stand for. There has been an entire community that has been on this roller coaster with me, from a young teenager to a 31-year-old mum.

“I hope to still be around the traps, with the passion to continue to grow this game still burning inside me, but as a player it's time to hang up the boots.

“I am extremely proud of my career, not for any of the accolades or 'successes' but for the way I did it, in my own way even if it meant taking the path less travelled.”