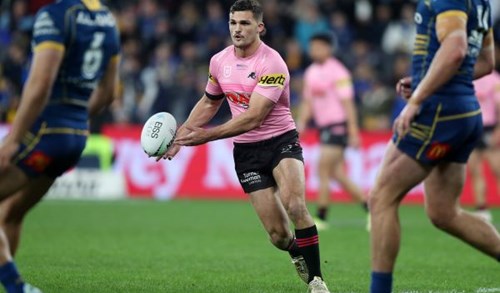 The first round of NRL finals this weekend will see the return of 15 True Blues and Emerging Blues as the countdown begins for the Telstra Premiership Grand Final on 2 October.

The host of NSW stars are either returning from injury, suspension, or from being rested ahead of Week One of the finals.

The Penrith Panthers will be boosted in their top-four clash against the Parramatta Eels on Friday night by a host of returning Brydens Lawyers NSW Blues players; most notably halfback and co-captain Nathan Cleary, who returns after missing five matches for a dangerous throw.

Coincidently Cleary will come up against Eels five-eighth Dylan Brown; the player he committed the dangerous throw on which saw him sent from the field and later suspended.

Five-eighth Jarome Luai, who missed four weeks with a knee injury before returning in Round 24 to play the Warriors, will also return after being rested for the Round 25 game against the North Queensland Cowboys.

Luai joins fellow NSW Blues teammates Stephen Crichton, Lian Martin and Isaah Yeo, who were all given the week off from travelling to Townsville by coach Ivan Cleary. Hooker Api Koroisau is returning after an ankle injury.

In Saturday’s elimination final between Melbourne Storm (5) and Canberra Raiders (8), NSW Blues utility Jack Wighton is back in the No.6 jersey after a week’s rest.

The Cronulla-Sutherland Sharks have 2021 Emerging Blue Toby Rudolf (knee) and True Blue forward Dale Finucane (ribs) back in the line up to face the Cowboys at PointsBet Stadium.

Passing the last concussion protocols is also on the cards for Rabbitohs skipper and NSW Blues forward Cam Murray, after he lasted only one minute in last weekend’s Round 25 game – also against the Roosters in a tackle on Kevin Naiqama.

Murray’s leadership both as skipper and with ball in hand will be doubly effective when coupled with Brydens Lawyers NSW Blues teammate Damien Cook, who has missed the past two games after contracting the COVID-19 virus.