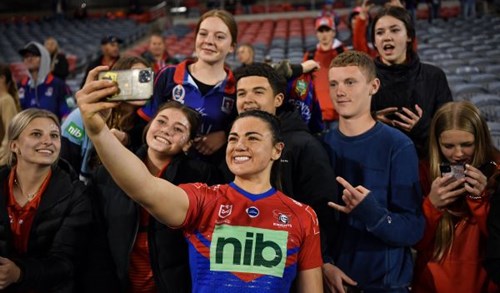 Harvey Norman NSW Sky Blues prop Millie Boyle has traded her one-team-town in for another following her move to the Newcastle Knights from the Brisbane Broncos, but they are a different beast in the Hunter.

Boyle won three NRLW premierships with the Broncos (2018-20) and is out to get one for her new club, when the Knights take on the Parramatta Eels in the Telstra Women’s Premiership on Sunday at Accor Stadium.

“I’ve really noticed how much this town gets behind the footy whether it’s the men or the women playing,” Boyle told nswrl.com.au.

“Someone is always stopping me to talk footy. They know who’s injured, who’s in and who’s out of the team each week. They know all the scores and they’re always encouraging me.

“I’ve never felt that intensity in fan experience before. I’m really feeling the love from the town.”

However, another kind of ‘beast’ is heading Boyle’s way on Sunday, when she lines up against her old friend and rival in the middle, Eels captain Simaima Taufa.

The pair ploughed through the metres as teammates in NSW’s 20-16 State of Origin win over the Maroons in June, but this time they’re butting horns for a different prize.

“I have so much respect for ‘Mimes’, she’s one of my great friends,” she said.

“I’ve played with her and against her for quite some time now.

“She just does not stop working in a game. She will play through anything – broken body, burning lungs – she will just keep charging through for her team.

“She is always one of the best on the field and never lets anyone down.”

Boyle certainly carries herself well also. With 471 post-contact metres and 1,137 running metres, she leads the NRLW in both those categories. Taufa is in the top-three for both.

Another two hard workers among the forwards on Sunday will be namesakes Ellie Johnston and Caitlan Johnston – no relation but they have remarkably similar physiques and running styles.

“Sometimes I want to stop and watch these two on the field because they both run pretty hard,’ Boyle said. “I know I wouldn’t want to be caught in the middle of that.

“Ellie is a fine player but Caitlan has had one of her best seasons too.”

Johnston, who won the inaugural Sky Blues Award at the Brad Fittler Medal this year, has averaged 11 hit-ups and 129 metres per game for the Knights this 2022 season.

At 21 she is among the up-and-coming players, learning off the likes of Boyle.

But while the 24-year-old takes great pride in mentoring others, she has not reached her own limits.

“There’s still little things I want to work harder on, like inside pressure and kick-pressure,” Boyle said. “These extra efforts might not always be on the highlights reel but they’re vital to a team’s success.”