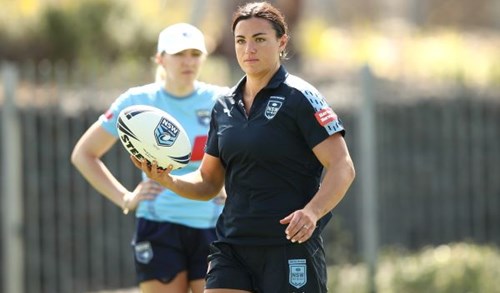 Boyle previously played for the Burleigh Bears in Queensland Cup, while a member of the Brisbane Broncos NRLW team where she won titles in 2019-20.

She moved to the Newcastle Knights in 2022 – winning her third Premiership in their maiden title success over Parramatta – but did not play any club Rugby League after the 2021 NRLW season.

“I moved to Canberra after the first (NRLW) season to be with Adam (fiancé Adam Elliott) so I missed the club season,” she told nswrl.com.au.

“I didn’t have a lot of footy between that and the Origin game, so I’m definitely not doing that again.

“It wasn’t by design – it just worked out that way.

“But next year I’m playing Harvey Norman NSW Premiership for Newcastle, which I’m very excited about. It will be great to play with more local girls and then build towards the NRLW.”

Boyle has transferred from one Rugby League-mad city in Brisbane to another in Newcastle.

“Winning a premiership with the Knights was very different to the Broncos,” she said.

“The Newcastle fans are on another level when it comes to their footy – they absolutely love it.

“I didn’t fully understand what our premiership meant to the town – I do now.”

Boyle, who won State of Origin with NSW in both 2019 and 2022, joined Sky Blues coach Kylie Hilder for a Junior Sky Blues (Under 18s) for 25 regional players at Ignite HQ Centre of Excellence last weekend.

“It was relevant to me as I’m from a rural community – Cobargo – so it’s amazing what NSWRL is doing because it’s not just city girls getting this opportunity,” Boyle said.

“Now we’re getting the best players no matter where they’re located and giving them access to our top coaches and our Origin facilities.

“The ultimate goal is Origin - they can see it here and they can be a part of it, if they are ticking all their boxes and performing well on and off the field.

“The boys have had this opportunity for quite a while so it’s great to see the girls getting the same.”

Boyle said she had recharged her batteries after a hectic season, which ended with her withdrawing from the Jillaroos 24-player squad for the World Cup to focus on her interests off the field.

“I’m feeling really good and been really productive in this off-season, which is great,” she said.

“I feel refreshed, and I’ve set up more work on my business ‘Training Group’ with the planning and organising of programs for 2023.

“We’ve also got an ‘All Abilities’ team in the Hunter we want to have play before the boys’ NRL home games against other teams with physical or intellectual disabilities.”