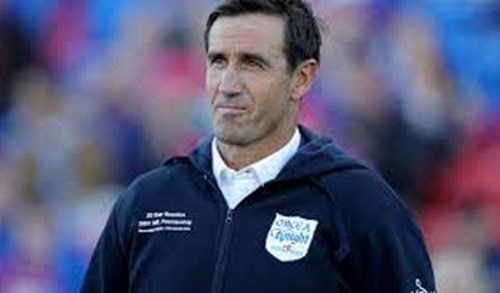 The man former teammates call ‘the Beautiful Mind’ – Andrew Johns – re-engages with his old club the Newcastle Knights in November as a coaching consultant.

And the man who passed the ball thousands of times to Johns – Danny Buderus – can hardly wait to link with him again as the champion hooker and halfback did for the Knights, the NSW Blues and the Kangaroos.

“We call him the ‘Beautiful Mind’ because there’s sometimes that much going on inside there,” Buderus said.

“But in the end, you’ve got to relate the message to the player, and he’s got a great way of making them understand it. He knows how some players learn things differently and ‘Joey’ is great at communicating that.

“You see he does it on the TV to the fans watching and he’ll do it when he’s one-on-one with players.”

Buderus is now Football Manager at the Knights but has been keeping an eye on hooker Jayden Brailey. With Johns now signing on as another positional expert, that’s now two Dally M winners coach Adam O’Brien can call on.

“I’ve worked a bit with Jayden over the last two years but we’re going to work with Andrew and our No.9s and No.7s,” Buderus said.

“My focus will always be on the management of the team but at the same time, I’m looking forward to getting training with them again. When there’s those specialist coaching days, I might put a different shirt on.”

Buderus also said Johns’ expertise wouldn’t just be for the benefit of the NRL squad. Halves playing in The Knock-On Effect NSW Cup, SG Ball Cup, Laurie Daley Cup, Harold Matthews Cup, and the Andrew Johns Cup will also get to work with the Eighth Immortal.

“We’ve got nine teams under our club banner so his coaching will go all the way through to our contracted junior academy kids as well,” he said.

Johns is a two-time premiership winner, a three-time Dally M Award winner, a two-time Golden Boot winner, a one-club player with 249 games with the Knights, a Newcastle club life member, a World Cup-winning halfback who played 25 Tests for Australia, and a multiple Origin series winner.

Buderus and Johns played over 190 club games together at the Knights between 1997-2007, before Johns was forced to retire due to a neck injury.

“Just having him excited to be amongst the club again is great,” Buderus said.

“All the players and staff look up to him so working alongside him will be unreal.”