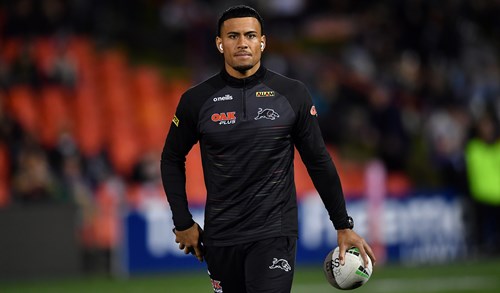 True Blue Stephen Crichton will be among friends when he lines up for the Canterbury-Bankstown Bulldogs in the 2024 NRL season.

The club announced Crichton’s signature on a four-year deal within a week of the 22-year-old telling fans he would be leaving the Penrith Panthers at the end of 2023.

But the Bulldogs were not prepared to discuss the Westpac NSW Blues star’s move because it was more than 10 months away.

“Out of respect to both Stephen and the Penrith Panthers, the club will make no further comment until he joins us at the end of the 2023 season,” the Bulldogs statement said.

Crichton himself told the Panthers website that he was out to make 2023 one of his best.

“It was the hardest decision to make, but now my full focus is on the 2023 season and finishing my time at Panthers as strong as I can,” he said.

His shift to Belmore next year perhaps will be made a little easier as he reunites with former Panthers Matt Burton, Viliame Kikau – who he won the 2021 Premiership with – and a player who came through the Penrith junior system, Corey Waddell.

Fellow True Blues Josh Addo-Carr and Burton are about to begin their second seasons with the Bulldogs.

Before he joined the Manly Warringah Sea Eagles in 2019, Waddell was a member of the Panthers NYC side under coach Cameron Ciraldo.

Both Ciraldo and Waddell are now with the Bulldogs.

Crichton will be keen to keep his spot in Westpac NSW Blues coach Brad Fittler’s backline for the 2023 State of Origin series.

He made his debut for the Blues off the bench in Game One last year and then started in the centres for Games Two and Three.

A second NRL Premiership with the Panthers over the Eels in October led to his international debut with Samoa at the Rugby League World Cup. He scored four tries in six games, including one in the Final loss against Australia.