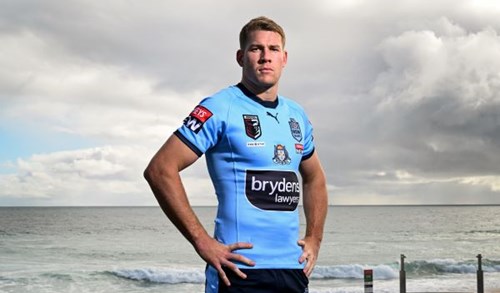 Brydens Lawyers NSW Blues Brad Fittler hasn’t finalised his game plan for Game Two of the Ampol State of Origin series but he won’t mind if debutant Matt Burton wants to bring his kicking game along with him.

Burton has been named to make his debut at centre but the Canterbury-Bankstown Bulldogs five-eighth could help ease some of the pressure off halfback Nathan Cleary when he runs out to face Queensland at Optus Stadium in Perth on Sunday night.

“I hope he kicks one, given what he kicked yesterday, I’d love to see one at least but I haven’t thought about it that much,” Fittler said in reference to Burton’s performance for the Bulldogs during their 36-12 win over Wests Tigers.

“There’s a lot of things we could have done differently (in Game One). One thing (Queensland) did really well was put pressure on our kickers and it was one thing we spoke to the referees about.

“They said it was right on the borderline so one thing we could have done was have other options. We didn’t play that part of the game very well.”

Burton for his part is happy to go along with whatever plan Fittler has for him. He is no stranger to the centre position having played there last season alongside his former Penrith teammates when the Panthers took out the premiership.

“I’ve got to thank all my Bulldogs teammates for getting me here and there’s a few of my (Penrith) teammates in there so I’m looking forward to getting the combinations from last year back on,” Burton said.

“I think learning it last year and trying to nail it 100 per cent and going back in there is going to be really good and I can’t wait for it. There hasn’t been any talk (around my kicking game) but I’m more than happy to step in there if it’s needed.”

Burton was still buzzing today after Fittler popped into the Bulldogs sheds at full-time to inform him he was about to make his debut for the Blues – with True Blue and teammate Josh Addo-Carr the first player to rush forward and embrace him.

“When he called me over after the game it was pretty crazy,” Burton said.

“It was really special for all the boys to get around me when it got announced and ‘Foxxy’ was the first one straight over to congratulate me. He’s a great bloke and he brings so much energy.

“I just couldn’t be more happier to get picked and looking forward to running out there with the Blues.”