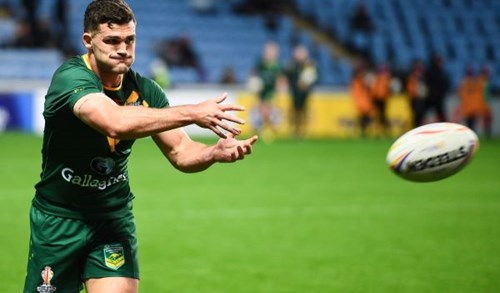 It will be an Origin-style showdown between Brydens Lawyers NSW Blues halfback Nathan Cleary and Maroons No.7 Daly Cherry-Evans, when the pair take to the field as Australian teammates against Italy this weekend for the final pool game of the World Cup.

It means the two premier halfbacks in the NRL will share the No.6 and No.7 roles as Meninga decides who will lead the Kangaroos attack in the Quarter-final against either Ireland or Lebanon on November 4.

“We're going to mix it up a bit,” Cleary said ahead of the Sunday morning (AEDT) game at St Helens’ Totally Wicked Stadium.

“We’ll just see how it’s going and who’s got the flow at the time,” he said.

“Daly is so good I can float around and work off him, it's something new for both of us.”

Meninga named his team in alphabetical order, rather than positional, so two players will have to drop off the list an hour before kick-off.

There are 10 NSW Blues players in the 19-man squad with Latrell Mitchell, Matt Burton, Cameron Murray, Liam Martin and Reagan Campbell-Gillard all named to play their second game of the tournament.

Jack Wighton has been named for his third straight game, after coming off the bench in the 42-8 win over Fiji and starting in the centres for two tries in the 84-0 whitewash of Scotland.

Campbell Graham has also been named after he was sent for scans on his left elbow after his hat-trick against the Bravehearts.

NSW and Kangaroos captain James Tedesco is also there – giving him the chance to play against Italy after representing them in both the 2013 and 2017 World Cups.

True Blues Isaah Yeo and Murray, who are the two Australian vice-captains on tour, have been named to face Italy.