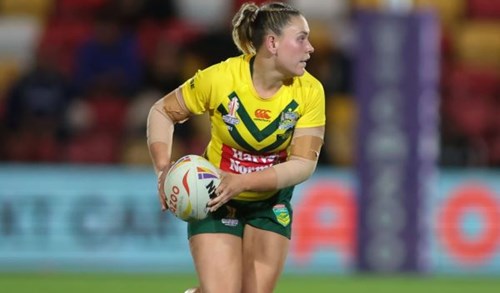 Keeley Davis has overcome an injury scare that could have derailed her maiden Rugby League World Cup campaign, robbing the Harvey Norman NSW Sky Blues hooker of a chance to play her first Test at this level.

But the talented Dragons No.9 has tirelessly worked on her left ankle and forced her way back into the Jillaroos side to face New Zealand for their last pool game before next week’s Semi-finals. The Jillaroos faced their toughest test to date against the Kiwi Ferns before prevailing 10-8.

It was Davis’ first Test on this tour – but her third for Australia after two games in 2018.

“I was pretty positive, I was thinking thank goodness it’s only the second session and not the back end of the tournament where I’d have to miss the bigger games,” Davis told nswrl.com.au.

The 22-year-old Corrimal Cougars junior is no stranger to injury interfering with representative football.

A back complaint on the eve of the 2020 State of Origin game forced her late withdrawal from the Sky Blues so when she got injured in the first week of Jillaroos training in York, she briefly had a flashback.

“My leg just got caught under a tackle and I strained some ligaments,” Davis said.

“I was certain then I wouldn’t be able to play at least the first two games (Cook Islands, France). It made it a bit easier watching those games knowing that.

“Still seeing the girls run out and represent is always something you want to be a part of.

“They played so well and gelled as a team and that made me want to be out there for sure.

“I just knew my chance would come. I just had to get stuck into my rehab and get the ankle sorted. I focused on that.

“I’m now confident my body will allow me to play the way I want to.”

Davis started at hooker but worked in tandem with Maroons’ Lauren Brown coming off the bench. She was at rake for the opening two tournament games.

“She’s been helping me out a bit even though she’s obviously the one that’s been out there training and playing.

“She’s kept me updated with game plans from the coaches during the field sessions I missed. I’m learning a lot off her even though we’re different style of players.

“I can’t wait to take the field with her finally.”

Slipping back into the hooking role with Maroons halfback Ali Brigginshaw has a familiarity about it since the pair played the vital No.9-No.7 roles in Davis’ previous two Tests.

“It’s good to be back with her as she’s one of the greatest – probably the greatest half I’ve played with,” Davis said. “She’s such a great ball player and organiser.

“I just worry about my job with the forwards around me and then I’ll be ready when Ali wants the ball.”

Davis is one of 12 Sky Blues players in the 17 named to play New Zealand.