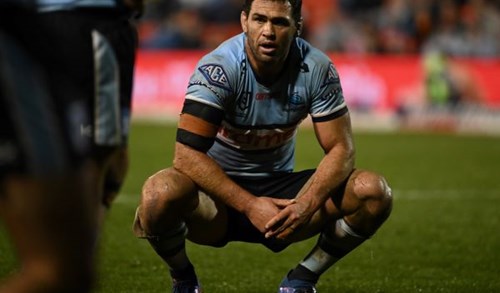 Cronulla-Sutherland Sharks forward Dale Finucane has claimed a precedent has been set after he was banned for two matches by the NRL judiciary for an accidental head clash with Penrith centre Stephen Crichton last Saturday night.

Finucane fronted the judiciary hoping to escape suspension for a dangerous contact charge after he charged out of the defensive line to put a hit on Crichton during the Sharks 20-10 loss at BlueBet Stadium. Crichton was sent for a HIA and later required plastic surgery for a split ear.

The pair were recently teammates for the Brydens Lawyers NSW Blues for Game Three of the Ampol State of Origin series in Brisbane.

“I am obviously extremely disappointed with the outcome, given that it was an accidental offence,” Finucane said after the hearing.

“While I empathise with Stephen over the outcome and the laceration of his ear, it has set a precedent for our game moving forward.

“I was quite surprised with the outcome given that it was an accidental offence and given that our game hasn’t seen anything sanctioned before for accidental head contact.

“Every week players from other sides, myself included, have a number of lacerations and bruises as a result of accidental head collisions.

“They have been unsanctioned in the past but obviously moving forward, they are now going to be sanctioning those cases.

“I don’t know if that changes teams’ tactics in terms of how they tackle or the factor of line-speed with the potential to have less time to make tackles.”

Finucane will miss the Sharks next two home games against South Sydney Rabbitohs and St George Illawarra Dragons, while Crichton was ruled out of Friday night’s match against Parramatta Eels.