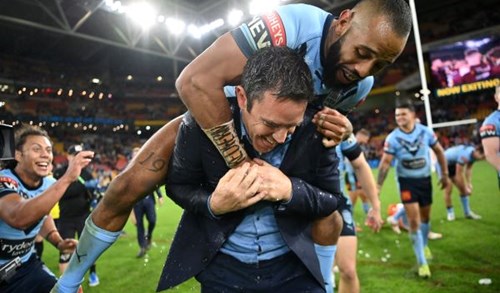 Brydens Lawyers NSW Blues coach Brad Fittler rated winger Josh Addo-Carr “one of the best players” in the World Cup-winning Kangaroos side and urged him to keep that form to earn his spot back in the State of Origin team.

Addo-Carr was one of the toughest selection headaches for Fittler in the 2022 squad, with wingers Daniel Tupou (Roosters) and Brian To’o (Panthers) getting the nod based on their strong starts to the NRL season.

Addo-Carr finished his first year at the Canterbury-Bankstown Bulldogs with 16 tries in 23 games, but didn’t score his first try until Round Six.

“He was playing better in November than he was in March,” Fittler said at a Talented Aboriginal Athletes Program (TAAP) camp at Ignite HQ Centre of Excellence.

“I think if he takes that into the off-season and then playing for Canterbury … they’ve got a new couple of players and all of a sudden they could be winning games.

“It always helps when you’re winning games, and he’s going back to a club that in my eyes will win more games because it looks like they’re going to be stronger.

“Everyone wants to see Josh play in the rep arena, where you can see that he takes the game to another level.”

Addo-Carr ended up with 12 tries in five games for Australia at the World Cup in the UK. He played in the Quarter-final win over Lebanon (five tries), the Semi-final victory against New Zealand (one try) and the Final over Samoa.

“He was fantastic (in England),” Fittler said.

“What he did is he proved that he’s the best person for that job. One thing that was really strong was his defence and he was carrying the ball out of trouble.

“He was one of the best players in the Australian team.”