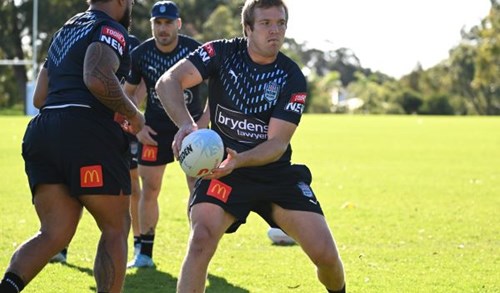 If the old adage is true that good things come in threes then the Brydens Lawyers NSW Blues have plenty to look forward to when Jake Trbojevic takes the field on Sunday night.

The Manly Warringah Sea Eagles lock was recalled to the Blues for the must-win game at Optus Stadium in Perth and was named to partner Payne Haas in the front row.

Trbojevic has played prop only twice in his 13 appearances for the Blues and both of those led to convincing wins.

The first occasion came three years ago - also for Game Two in Perth - when he shifted from lock to replace Paul Vaughan who was the starting prop (Dale Finucane came off the bench to start at lock).

He was later named man of the match after playing 73 minutes, making 19 runs for 158 metres and 30 tackles without missing one. The Blues went on to win 38-6.

Trbojevic also started at prop last year in Game One in Townsville and absorbed the early pressure for the first 29 minutes of the match. He made seven runs for 58 metres and 22 tackles with no misses. The Blues ran away with the match 50-6.

“He puts his head where not many people do and hardly anyone does,” NSW Blues assistant coach Danny Buderus told Behind Blue Eyes for nswrl.com.au.

“His tackle technique is second to none, if not the best in the competition.

“We need him to do a really good job in that part of the field for us, his line speed, he’s so passionate about the jersey, his will to win for the jersey, and we have to win.

“We had to pick a team that had to go out and win for Game Two and keep the series alive.”