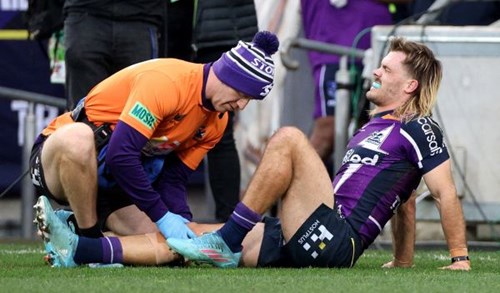 The run of bad luck and injuries has continued for Ryan Papenhuyzen after the Melbourne Storm fullback suffered a fractured kneecap in Melbourne’s 20-16 loss to Canberra on Sunday at AAMI Park.

Papenhuyzen was into only his third game back from a hamstring tear he suffered in May, when a front-on collision with True Blue Jack Wighton led to a smashed right patella bone.

Storm coach Craig Bellamy said the early prognosis for the 24-year-old was that it was unlikely he’d be able to return to the NRL this year.

“He won’t be back I would imagine,” Bellamy said.

“It’s disappointing for Paps. I thought he was looking fairly sharp there.

“He’s felt although he’s laboured a little since coming back but he was sharp tonight.

“It’s disappointing for him, for us because it looks like it’s all over for the season for him.”

Papenhuyzen was initially due back from the hamstring injury in Round 15 against the Broncos but contracted COVID-19 and spent a further week out in isolation.

He has played 12 games from 18 rounds this year but already crossed for 14 tries and run for an average of 120 metres per match.

Papenhuyzen only managed 13 games from the 25-round competition in 2021 after a bad head knock in Magic Round kept him sidelines for nine weeks.