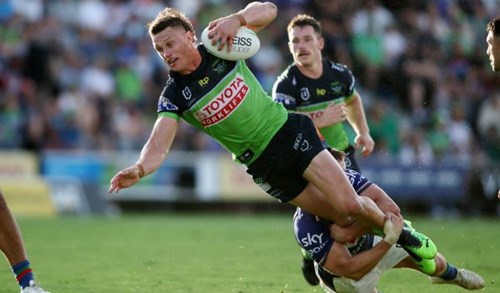 Brydens Lawyers NSW Blues utility Jack Wighton has admitted that missing out on the final 17 for the Ampol State of Origin decider has provided a little extra motivation for his club football.

The Canberra Raiders five-eighth played centre in Game One in Sydney, missed Game Two in Perth due to COVID-19, and then wasn’t selected for Game Three in Brisbane despite being named on the extended bench.

“Things like that always light a fire in the belly because you’re always trying to do better,” Wighton said in Canberra today, as the Raiders prepare to tackle top-of-the table Penrith on Saturday 6 August at GIO Stadium.

“Full credit to everyone who got picked in that team – they’re a great bunch of blokes who tried their guts out so full respect – but it does always light a little fire.”

The Raiders had a bye in Round 17 the weekend after Origin, but since then have won three straight games to be in ninth spot on the NRL ladder with 22 points – the same number as the Sydney Roosters in eighth.

“We’ve done nothing yet, we need to keep stepping up week by week and punch our way into that eight,” Wighton said.

“We just have to go one win at a time and capitalise on that.”

Wighton was coy about his own form since the Origin series finished, which has seen him average 100 running metres and 285 kicking metres a game.

“I’ve been happy all year mate,” he said.

“I just keep trying to build. I’m always learning and just having fun.”

But what has been progressing strongly is the relationship with new halfback and former Gold Coast Titan, Jamal Fogarty, who missed the first half of the season due to a knee injury in the trials.

From the eight games Fogarty has played, the Raiders have won five.

“If you really look at it, I think my kicking has got better because of Jamal,” Wighton said.

“Having a halfback on the other side of the field is making the opposition back three really think. That really opens up my kicking.

“He’s taken on more of that role as a kicker, so my options are better because I’ve got a half on the other side doing a great job.”

The Raiders could be ripe for the picking with their halves – NSW Blues incumbents Jarome Luai and Nathan Cleary – out through injury and suspension respectively.

But Wighton is not being fooled into a false sense of security.

“Through the Origin period they (Panthers) were missing most of their spine, and more, and they still blew teams off the park,” he said.

“So those (absences) mean nothing to us. We know they’re going to turn up – they are the reigning premiers.”