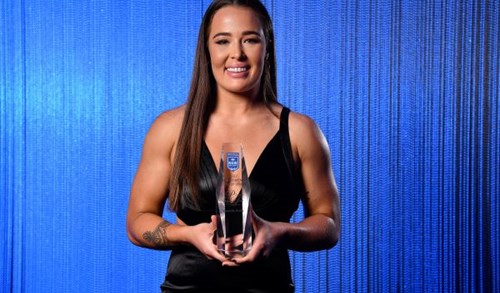 Harvey Norman NSW Sky Blues centre Isabelle Kelly says it’s her competitive nature that keeps her striving to be a better player every time she steps out onto the field.

It might also be the recipe behind why Kelly seems to be front-and-centre when the major players awards are handed out.

The 25-year-old was crowned 2022 NSW Women’s State of Origin Player of the Year at the Brad Fittler Medal in Sydney.

“I’m super lucky and super grateful… and super humble to be accepting all these awards,” Kelly said, who is also a two-time winner of the Nellie Doherty Award for being ‘best on field’ in Origin.

In fact, it was her try three minutes from full-time against the Maroons on 24 June that sealed this year’s 20-14 Origin victory at Canberra’s GIO Stadium.

“It was frantic because the game was very close and we knew we had to get over the line to win,” Kelly said.

“But I just remember Emma (Tonegato) throwing the ball and I just thought ‘I’ve just got to get it and run’. It came off the back of a run by Caitlan (Johnston) which got us in a great position to do that.

“Even though in those moments they say it’s the match-winner, I still feel it comes to down team effort.”

Johnston was also rewarded at the Brad Fittler Medal gala dinner by winning the inaugural Sky Blues Award voted for by the NSW Origin players.

For Kelly, who has been part of premiership-winning teams at club and NRLW level, playing for her state always holds a certain significance.

“This is the biggest game I love to play,” she said.

“I love representing NSW and pulling on that jersey. Every time I pull it on there is a special feeling that makes me want to go to another level.

“You have to be these days with all the younger girls coming through.

“I’m very competitive so I want to keep being the best I can be.”

Kelly was a member of the 2017 World Cup-winning Jillaroos side scoring six tries in five games, including a double in the final – a 23-16 win over the Kiwis.

She is after a second World Cup campaign, but first as captain of the Sydney Roosters NRLW side, she is hoping for back-to-back premierships.

Kelly is a fearsome player at the best of times but against Newcastle last weekend she showed why when she swooped on a loose ball and raced 70-metres for another match-winning try to keep the Roosters’ perfect 4-0 record after four rounds.