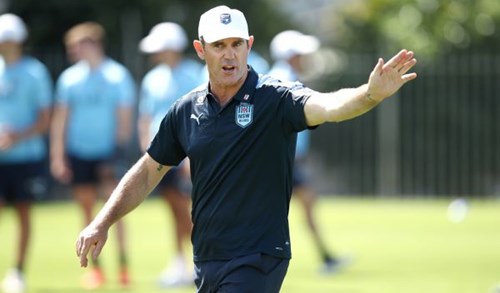 NSW Blues coach Brad Fittler is happy for the current State of Origin selection rules to remain but poses the question of whether international eligibility criteria should change.

Fittler knows international rules are not his domain – but that of the IRL (International Rugby League).

However, he thinks both games should complement and not cannibalise each other.

“How you want to deal with it in the international arena, that is a little more challenging.

“Obviously there’s World Cups and players who nominate Australia and then are able to move onto other nations.

“But at the end of the day State of Origin should be for people who were born or lived in the states of NSW or Queensland before the age of 13.

“That’s not changing any rules. What you do with international football needs a little more detail.

“But they are the rules in Origin at the moment and I don’t see why they need changing.”

State of Origin games are seen as the selection trials for the Australian team.

But if a NSW or QLD eligible player chooses another Tier One nation – New Zealand or England (as Victor Radley did) - then they cannot play Origin, whereas players from Tier Two like Tonga, Samoa, and Fiji can.

“Sebastian Kris just played for New Zealand (in the World Cup) after he played for NSW ever since he was 15,” Fittler said.

“Reimis Smith played for New Zealand but he’s played for NSW and grew up in NSW since he was a baby.

“I wonder why these players don’t have the chance or the opportunity to play for NSW because of the heritage of their father, and they get the ability to play international football at some stage of their career.”

Fittler said having international rules not interfering with Origin criteria only strengthened both games.

“You have more players to choose from,” Fittler said.

“What happens when you play State of Origin, which is a more intense game, you take that experience to another game.

“So every time you play at a higher level you take that (Origin) experience and hopefully you’ve learnt some calm and some control in big-pressure games.”