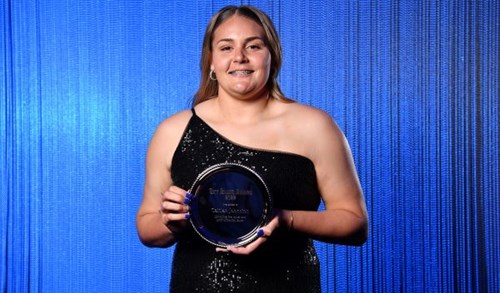 It is fitting that the first woman to win the inaugural Sky Blues Award at the Brad Fittler Medal is also the player bringing in many new fans to the female game.

Caitlan Johnston made her debut in this year’s Harvey Norman Women’s State of Origin and already has made a name for herself with just one run – the return-kick at the start of the second half where she juggled the ball, retrieved it, then mowed down Maroons forward Jessika Elliston.

“I could see it coming and I could see their halves were a little too wide,” Johnston recalled of that moment.

“Honestly, I just saw the ball and when it bounced off my head, I just wanted to get it back in my possession and run hard.

“That’s what my job was – back-fence run was the best option.”

It was one of six tackle-busts for the front rower on the night, along with her eight other hit-ups for 99 metres – 31 of those post-contact - and two line-breaks as she terrorised the Maroons defenders up the middle.

But the Sky Blues Award wasn’t just for that 38 minutes of mayhem.

It was voted on by Johnston’s Sky Blues teammates as someone who epitomises the ethos and values of being a NSW Origin player.

Still, everyone wants to know the source of those barnstorming runs.

“I get asked that question a lot,” she said.

“I think it’s just that I’ve always grown up around Rugby League – a lot of my family are all football heads so there was a lot of backyard footy with my cousins and siblings.

“I love the game the way it is with the contact and everything, so I’ll always be aggressive.”

While Johnston has launched herself into prominence this season, she’d like to remind people that she’s been around for a few years – making her representative debut with the 2019 Indigenous All Stars just one month after her 18th birthday.

It was the same year she was selected in the Prime Minister’s XIII to play Fiji in Suva and three weeks later was 18th woman for the Jillaroos Test against New Zealand in Wollongong.

The now 21-year-old is into her third NRLW campaign – her second year with the Newcastle Knights. She also plays for the Knights in the Harvey Norman NSW Women’s Premiership.

She can see improvements in her game and wants those to continue. She has also set her sights on making the squad for the Women’s Rugby League World Cup at the end of the NRLW season.

“I think it is my maturity, I’m still very young – I’m only 21 – but I’ve tried to adapt to the game well for someone my age and I take the responsibility on my shoulders,” she said.

“A lot of the girls think I’m older than I am because of the way I play. But I am still young.”

There is some unfinished business though – a Test jersey.

“I hope I’m in that green and gold jersey at the end of the year. That’s always been a goal of mine to be in the Aussie side.

“I was 18th woman a few years ago so I definitely want to be in that squad.”