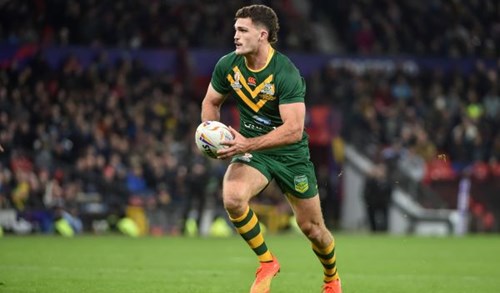 Kangaroos coach Mal Meninga and teammates alike have heaped praise on halfback Nathan Cleary for his performances in Australia’s successful World Cup tournament, after he overcame criticism to play a key role for the team at Old Trafford on Sunday.

Cleary now becomes just the third player – alongside Cooper Cronk (2017) and Allan Langer (1992) – to start at halfback for both a Grand Final and World Cup Final victory in the same year.

The 25-year-old put an exclamation point on his debut World Cup campaign with three try assists (eight for the tournament), four line-break assists, a 40-20, four tackle busts and 126 run metres against Samoa at the ‘Theatre of Dreams’.

“I thought he was excellent, not many people expected it (his performance in the World Cup Final) except us,” Meninga said.

“It’s been ridiculous, to be honest with you, the banter that’s been going on, but we had belief in our team and what we’re doing, and he was exceptional.”

Tedesco, who was named Player of the Final with two tries in the decider, shared Meninga’s sentiments on his NSW and Australian teammate.

“I don’t understand some of the comments that come at Nathan but he’s one of the best players in the world and he showed it tonight,” Tedesco added.

Mitchell, who played a starring role in the 30-10 victory, also shared his thoughts on Cleary’s form of recent seasons up to now, which has included consecutive NRL Premierships and several Origin series wins.

“Everyone gives him a bit of stick – when you’re at the top of your game and winning, everyone wants to see you fall,” Mitchell said.

“It’s all credit to Nathan the way he’s conducted himself, and I’m very proud of him and the way the year has turned out for him.

Cleary said he had managed to tune out to the “outside noise” and was looking forward to representing Australia for every opportunity he received.

“I’m 25 and there’s a long way to go, I feel like I’m just scratching the surface so very grateful for what’s happened so far,” he said.

“It’s not every day you get to win a World Cup at Old Trafford.”