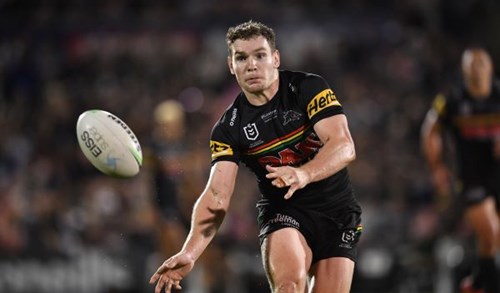 True Blue Mark O’Meley believes Penrith back-rower Liam Martin could step up to a starting position on the edge for the Brydens Lawyers NSW Blues side in the absence of the injured Cameron Murray.

O’Meley knows a thing or two about the grind of an Origin forward pack having played 10 times for NSW across four series, including the 2004 win.

The premiership-winner with the 2004 Bulldogs and a Kangaroos front-rower has been keeping a watchful eye on Martin, especially since they have a link with the bush – Martin from Temora and O’Meley from West Wyalong.

Martin made his Origin debut last year playing all three matches off the bench.

The 25-year-old’s form for the Panthers this year – four tries in eight games – has O’Meley thinking he’s the best option as Murray’s replacement.

He feels the time is right to give the hard-running second rower a start in the Brydens Lawyers NSW Blues run-on side for Game One at Sydney’s Accord Stadium on 8 June.

“Liam Martin is in some great form, shows some good intent and is developing really well,” O’Meley said.

“He’s a good kid and had a taste last year. I think he deserves the spot.”

There is also some disruption to the NSW Blues back-line with Latrell Mitchell’s hamstring tendon, but at least Tom Trbojevic (knee) and Brian To’o (ankle) returned last weekend to the NRL with Manly and Penrith respectively.

O’Meley was particularly impressed with To’o’s game-high 266 metres off 22 runs despite the 22-20 loss to Parramatta.

“We need to pick our back five first - they set your platform, they keep you going forward especially with the defence your middles have to do these days,” O’Meley said.

“To’o was outstanding on the weekend – big metres.

“He’s got speed… you can’t buy pace. I ‘d hate to defend against him on an edge.”