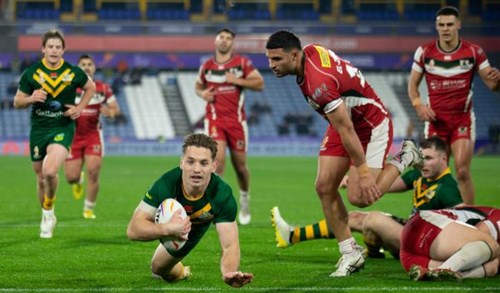 Cameron Murray has been the standout player for True Blue Luke Lewis at the World Cup, with the Kangaroos vice-captain to continue filling his crucial role off the bench for Australia’s Semi-final against New Zealand at Elland Road, Leeds.

Lewis, who played for Australia 16 times including the 2013 World Cup, has been impressed with several Brydens Lawyers NSW Blues players in the Kangaroos line-up but it’s Murray who has really caught his eye.

Murray, the South Sydney Rabbitohs skipper, has scored three tries in his three World Cup games so far – one against Italy in the that 66-6 victory and two in the 48-4 Quarter-final win over Lebanon.

Kangaroos coach Mal Meninga has preferred the starting combination of Isaah Yeo, Angus Crichton and Liam Martin, with Murray playing a key role off the bench where he has busted through tackles, offered up try assists and defused kicks.

Against Italy, Murray clocked up 152 metres – 59 of those post-contact – as well as pulling off 27 tackles, which was the highest of the Australian players.

His two tries and four tackle-busts in the Quarter-final ensured he brought the impact Meninga wants from his interchange players.

“Cam Murray has been really standing out, he’s been playing some outstanding football,” Lewis told nswrl.com.au

“You can’t go past Nathan Cleary, who’s really starting to assert his authority; Josh Addo-Carr has been scoring tries from anywhere, but he’s got some really great players on his inside doing their job; then there’s Tedesco, but everyone knows about him.

“So, I’ll stick with Cam Murray – he’s one guy who has really stepped up.”

Lewis said the Kiwis represented a whole new challenge especially with Joey Manu at fullback, Jahrome Hughes at half, Dylan Brown at five-eighth and Brandon Smith at hooker.

“Obviously New Zealand have a really good side from one to 17… but I really like their spine and their awesome forward pack.” Lewis said.

“It’s a really good match-up – can’t wait to watch this one – but I think Australia by two or four (points).”

The Semi-final at Elland Road in Leeds is on early Saturday morning (6.45am AEDT).