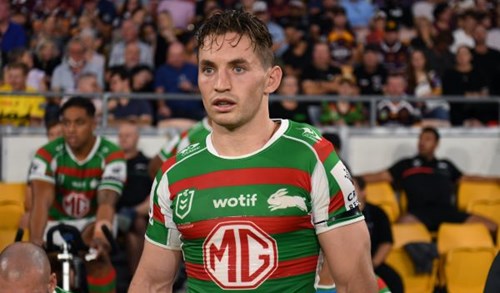 Brydens Lawyers NSW Blues back-rower Cameron Murray is facing an uphill battle to be fit for the opening game of the Ampol State of Origin series after scans revealed he had suffered a shoulder injury.

South Sydney Rabbitohs physiotherapist Eddie Farah said Murray had aggravated a shoulder injury that forced him to have surgery in the off-season and would be sidelined for up to four weeks.

“Cameron had a shoulder reconstruction at the completion of last season; he spent the summer in rehab strengthening the shoulder and returned to play this year without any problems,” he said.

“Unfortunately, over the past couple of weeks he’s developed some discomfort in the shoulder, so we sent him off for scans and he saw a specialist this week.

“We’ve decided the best management for him is to have a minor shoulder procedure. He’s getting that done today and we expect him back in three to four weeks.”

Murray was an integral part of the series-winning NSW team last year after starting all three games in the back-row.

He has played nine times for Souths this season scoring two tries, averaging 112 running metres a game, had 15 tackle-busts, 14 offloads and made 404 tackles with a 95 per cent efficiency rate.

Brydens Lawyers NSW Blues coach Brad Fittler will pick his team for the Origin opener at Accor Stadium on Wednesday June 8 following the end of Round 12.