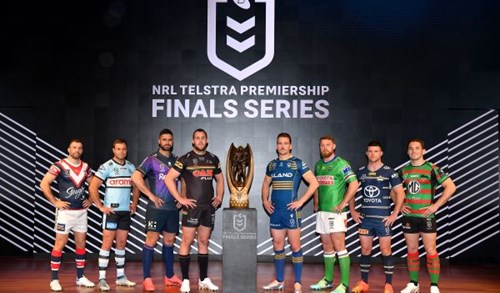 The 2022 NRL Finals Series will be led by members of the Brydens Lawyers NSW Blues Origin squads, with six of the eight skippers involved having the honour of captaining their teams.

In fact, there are eight NSW Blues players in charge for Week One of finals starting on Friday night with the Penrith Panthers hosting the Parramatta Eels.

The co-captains at those two clubs includes four NSW Blues – Nathan Cleary and Isaah Yeo for the Panthers, and Clint Gutherson and Junior Paulo for the Eels.

Rounding things out are Cameron Murray (South Sydney Rabbitohs) and James Tedesco (Sydney Roosters), who were part of the series this year, Chad Townsend (North Queensland Cowboys) who was part of the extended squad, and True Blue Wade Graham (Cronulla-Sutherland Sharks).

Murray will be hoping his luck changes this time around.

This year will be his fifth NRL finals series, where he has finished one game shy of the Grand Final three times (2018 lost to Roosters, 2019 lost to Raiders, 2020 lost to Panthers) before losing the 2021 Grand Final to Penrith.

Cowboys skipper Chad Townsend, who was on the NSW Blues extended bench in Game III this year, is also a premiership winner but with the Cronulla-Sutherland Sharks (2016).

Wade Graham was Townsend’s teammate in the 2016 triumph and has played 13 NRL Finals game in total but has won only five of them.

For Cleary and Yeo, they are the NRL Premiers with both also playing 13 finals matches and winning eight. Both men are entering their sixth series.

For Gutherson (six finals) and Paulo (nine) they are both searching for their maiden Grand Final appearance.

Gutherson hasn’t been past Week Two with the Eels, while Paulo got to the Preliminary Final with the Raiders in 2016 before switching to the Eels in 2019.