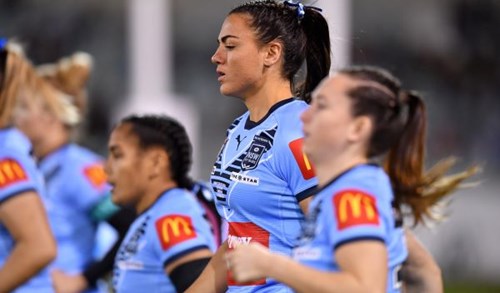 The Harvey Norman NSW Sky Blues and NSW Under 19s Women’s Origin team are well represented for the NRL’s annual Veronica White Medal which celebrates community achievements by the NRLW during the season.

The list will be narrowed to three finalists announced during NRL-NRLW Grand Final week, where the public takes over to decide the 2022 Veronica White Medal winner. The winner is given a $3,500 cheque for their Junior Rugby League club or nominated charity.

Boyle is not only fierce on the field in carrying the ball up, but she’s passionate about giving people with disability a voice.

She started the Game Changer program to help people realise their full potential.

This year Boyle has delivered seven Game Changer workshops throughout NSW and Queensland, including a one-day seminar at the NSWRL Ignite HQ Centre of Excellence on 11 July, where participants got to sit in the Origin dressing rooms and walk ‘the players’ tunnel’ into Accor Stadium.

As a proud Indigenous and Maori woman, Kernick was involved in the Sydney Roosters NAIDOC week celebrations across NSW and supports her nominated charity – Yerin Eleanor Duncan Aboriginal Health Services.

She played for the Maori All Stars in February, but frequently cites the pride of working for both cultures. She also made her NSW Origin debut in June.

Cherrington was one of Kernick’s Maori teammates and since she had heart disease troubles as a child, that’s been her focus with her increasing Rugby League profile.

She proudly supports several charities and special fundraiser events, including Heart Kids Charity, the ‘2 Feet and a Heartbeat’ walk, and a Superhero Day fundraiser.

Chapman scored two tries in the Indigenous All Stars’ 18-8 win in February and wants to be a role model for all girls, especially young First Nations students.

That’s why she is a regular at school activities and speaking engagements to spread encouragement.

The Veronica White Medal was first awarded in 2019 with former Warriors and Kiwis Ferns star, Honey Hireme, the inaugural winner.

White was an integral part in developing the Women’s Interstate Challenge - now the State of Origin - and pushed for a national women’s competition to be formed back in the 1990s.

She is a former Jillaroo, playing her last game for Australia in 2004.