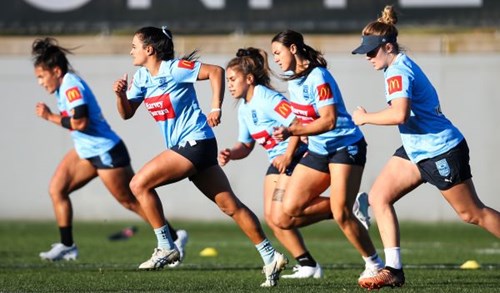 The Harvey Norman NSW Sky Blues are living proof the NSWRL pathways for female players is a roaring success.

The 22-member squad went into camp at the Novotel at Sydney Olympic Park today in preparation for next Friday’s Ampol Women’s State of Origin at GIO Stadium with six debutants in the squad.

Most of them came through the Harvey Norman Tarsha Gale Cup and then into the NSW age group representative sides.

“I’ve got a few players that have come through our NSWRL pathways so I can’t wait for them to go out and play some footy,” Hilder said.

“It’s exciting for all those girls.

“Caitlan Johnston came through Under 18s three years ago at North Sydney Oval; Olivia Kernick was in that same side. And Teagan Berry was also there in 2019 and our Under 19s winning side last year at the Sunshine Coast.

“It’s exciting these girls are stepping up; getting these opportunities. Our game is in a really good place here in NSW.”

The starting 13 and bench will be named on Monday.

Hilder said even Pearson, who is on debut at age 28, has progressed through the system.

“We’ve got a new halfback in Rachael Pearson so I’m excited for her to get out there because she’s worked her way up into this rep position,” Hilder said.

“She’s performed well for the NRLW Dragons – and we know halfbacks are so important in any team.

“She’ll take control – she’s got a pretty big job ahead of her but I’m really confident she can do that job. Her kicking game is outstanding.”

Sky Blues captain Kezie Apps has been a teammate at two clubs with Pearson.

“I’ve been lucky enough to play with her through Helensburgh (Tigers) and the Dragons (NRLW).

“Just seeing her growth and the talent she has. She’s been working really hard, so I knew higher honours were ahead for her.

“She’s just so calm – a typical country girl so laid back and easy going.”

The Harvey Norman Sky Blues leave for Canberra on Monday, knowing that a chilly night lays ahead on game day with a 7.45pm kick-off.

“It’s going to be cold obviously and a lot different to here or if we were playing in Queensland,” Hilder said.

“We’ll prepare for a slippery ball, and cold conditions, but we’ve got the mindset we’ll play anywhere, anytime.”