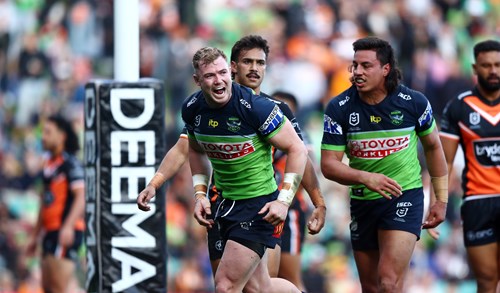 Tedesco’s performance on Friday night was only fitting for the occasion after he led the Roosters out for their first NRL game at the brand new Allianz Stadium.

He scored a try off the back of an Angus Crichton break, made two line-breaks, had five tackle busts and forced one drop-out. Tedesco also managed 275 run metres including 52 post-contact and 92 from kick returns.

Canberra finished the season in style with seven wins from eight games to secure a spot in the finals, and Cotric was one of their best in the Round 25 victory to earn his first TOTW selection for 2022.

Against the Tigers he bagged his 56th career try, made two line-breaks and five tackle busts while running for 114 metres.

This Bulldogs youngster plays the game with plenty of passion and Schoupp found himself on the scoresheet in his side’s nail-biting win over the Sea Eagles in their final match of the season.

Schoupp scored a crucial try from an intercept to level the scores in the 49th minute, had a tackle bust and 188 run metres, and made seven tackles on the left edge.

With three wins on the trot the Red V may wonder what could have been in 2022, but in Saturday’s win Lomax undoubtedly produced his best game for the year.

Along with his three conversions from four attempts, the No.4 set up a try and a line-break, made five tackle busts and ran for 240 metres – 107 of those post-contact.

Nofoaluma has had quite the run of form since the move to Victoria only a month ago.

The winger was a standout among a losing side in Round 25, rewarded with his fourth TOTW nomination and second from five games for Craig Bellamy’s side.

Nofoaluma scored his fourth try in Storm colours on Thursday night, made a line-break and assisted one other, broke four tackles, threw two offloads and ran for 178 metres with 59 from kick returns.

We often hear about Burton’s boot in reference to his towering, floating bombs, but on this occasion it was a clutch field goal in the dying stages that stole the headlines in Friday night’s one-point win.

Burton played a key role alongside halfback Kyle Flanagan to steer the Bulldogs home from a 16-point deficit, running for 58 metres and amassing a huge 475 off the boot from just 13 kicks.

With the home and away season coming to an end many pundits have Hynes well in the hunt for the Dally M Medal, and Saturday’s display – his eighth TOTW start – reaffirmed just how influential he has been for the Sharks this year.

Helping his side to second position and a home final in the 38-16 win, Hynes produced two try assists and three line-break assists, made five from seven conversions, kicked for 231 metres and made 20 tackles.

The Woodberry Warriors junior has been one of the few shining lights for the Broncos in the back end of the season.

In Brisbane’s final game for 2022 he mustered 17 runs for 205 metres with 99 post-contact, three tackle busts, two off-loads and 27 tackles. It was another mighty effort from the 22-year-old who again – almost unfairly in some respects – found himself on the losing side.

Behind every club making the NRL Finals will be a hooker who not only distributes the ball well but finds attacking opportunities regularly and plays instinctive, creative football.

It was Robson weaving that kind of magic again in the big 38-8 win over the ‘baby’ Panthers. He scored a try, made two line-breaks, had a try assist, three tackle busts, six dummy-half runs for 68 metres and made 21 tackles.

Paulo, along with Payne Haas, have been stalwarts for their clubs this year earning them multiple TOTW nominations.

And how could you deny Paulo a fifth call-up after his 90 post-contact metres – part of 21 runs for 216 metres - against Melbourne Storm’s international pack of forwards in the Eels 22-14 win? He also made two tackle-busts, three off-loads and gave up no penalties.

Crichton forever has the tag of being the first NRL player to score a try in the reconstructed Allianz Stadium.

But he played an even greater part in the 26-16 win over the Rabbitohs with his 19 runs for 179 metres, two line-breaks, a try assist, three tackle-breaks, two offloads and 32 tackles.

Young has scored in five of his past six games for the Raiders – or seven tries to be exact. The last two wins over Manly Warringah and the Wests Tigers he’s scored doubles, giving him 13 tries from 23 games so far this year.

On top of that pain for the Tigers at Leichhardt Oval was Young’s two line-breaks, nine tackle busts, an offload and 24 tackles.

Bird is a ball of energy at the best of times but with the No.13 on his back he can terrorise both the middle and the edge.

For the Dragons’ finale to the 2022 season he scored his seventh try of the year, along with 15 runs for 129 metres – 44 post-contact, a line-break, five tackle busts, two dummy-half runs for almost 20 metres and 35 tackles.