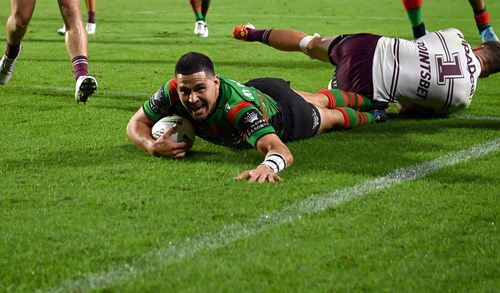 In a side that continues their search for attacking rhythm, Tedesco gave his best in Round Eight to amass 299 run metres from 25 carries with 105 via kick returns and 65 post-contact – just five days after surpassing the 300 mark against St George Illawarra.

On Saturday he also scored his second try of the season to move one shy of the century milestone, made one line-break and 11 tackle busts, and threw four offloads.

Meaney earns himself a second consecutive TOTW selection and has found a home in the Melbourne Storm’s back five during their unstoppable point-scoring run of the past few weeks.

He scored a 60th-minute try in Round Eight, along with a try assist, three line-breaks, eight tackle busts, one forced drop-out and 201 run metres including 51 post-contact.

Staggs against Talakai was the matchup everyone was waiting for on Thursday night, and with the opening try in a Broncos win it was the former who came up trumps this time.

One of the handful of centres putting their hand up for a NSW debut in the coming weeks, Staggs also had one line-break and six tackle busts, ran for 116 metres and made 18 tackles.

Another three-quarter on Brad Fittler’s radar, Graham had a strong outing on Friday night which included several key defensive stops against the returning Josh Schuster – a proven threat on the Sea Eagles’ left edge.

The Rabbitohs’ centre finished the match with a try assist and line-break assist, four tackle busts, 190 run metres with 78 post-contact, and 24 tackles.

Going into a big clash against the Sydney Roosters in Round Eight, it always seemed Josh Addo-Carr’s try-scoring nous or electric speed was going to have some kind of impact if the Bulldogs were to claim a memorable victory.

That was certainly the case when the Fox scooted from dummy-half to open the scoring in the 13th minute, followed by an 85-metre intercept try moments later. He also recorded a line-break, five tackle busts and 163 run metres.

It was only fitting to see Walker return to some of his best form in the South Sydney five-eighth’s 150th NRL appearance.

He not only snaffled a late offload to score in the corner at the 50-minute mark against the Sea Eagles, but had a hand in two other tries, produced two line-break assists, had one line-break from 86 run metres, tallied 203 kick metres and made 21 tackles with no misses.

Just as the Penrith Panthers looked to be having an off night when they trailed 4-0 at halftime against the Titans, the crafty No.7 took it upon himself to pull his side out of the fire in the second half.

It started in the 43rd minute with a grubber for Izack Tago to score, before Cleary came up with a try of his own soon after. He put the icing on the cake at four minutes remaining with another grounded kick into the hands of Jarome Luai.

All those involvements came alongside three successful conversions for the evening, while Cleary also managed three tackle busts, 55 run metres and 590 metres off the boot with two forced drop-outs.

With a work-rate like Twal produced it seems grossly unfair he was on the losing end of the scoreboard. Then take a look at his tackle efficiency in 2022 – 99.2 percent.

His 186 metres was only pipped for the most ground covered by Dragons centre Moses Suli – remembering Twal was on the field for 18 minutes less as an interchange forward.

His 22 runs included 81 post-contact metres, four tackle-busts, and 32 tackles without missing one. A scan back through his previous games in the black, white and gold this year and he’s only missed a staggering two tackles in eight rounds.

He’s becoming a familiar sight in TOTW and that won’t be changing if keeps up these kinds of figures.

The Brydens Lawyers NSW Blues hooker had 111 receipts for the Rabbitohs in their win over Manly Warringah on Friday night. His 95 metres from 12 runs included 77 metres from dummy-half – which is certainly this No.9’s trademark. Cook also had two line-break assists, one try-assist and four tackle-busts.

Haas is another mainstay in the TOTW front row, and he’s been doing it recently carrying a left shoulder joint injury.

Again he was troubled by it when the Broncos upset the Sharks on Thursday night, but he still made 15 runs, 132 metres – 69 of those post-contact – and 26 tackles with no misses for his 54 minutes.

The tropical Darwin heat might have sapped some, but not Matterson. He made a game-high 210 metres from 21 runs while up against one of the experts in the business Jason Taumalolo (187).

Matterson produced 79 post-contact metres, made 30 tackles and busted out of two. His three offloads keeps the Eels’ second-phase play going, which is one of his many talents. The only sour note on a worthwhile night for him was the loss to the Cowboys.

The Brydens Lawyers NSW Blues incumbent has been lurking on the fringe TOTW selection but could not be overlooked after Saturday’s input against the Bulldogs – albeit coming away without a win.

In a sterling 80-minute effort Crichton made the most post-contact metres of anyone on the field with 80. Add on his 17 runs (135 metres), a line-break assist, two tackle busts, two offloads and 41 tackles (missing just one), and you can see why the 26-year-old makes his TOTW start this week.

Maybe it was facing his former club, or the fact he is excelling under the Storm’s tutelage, but King was indeed ‘royalty’ in Sunday’s pounding of the Newcastle Knights.

He topped all those on the park with 212 metres off 24 runs (53 post-contact) and was only on the field 63 minutes. King also rattled off 22 tackles and made no errors.

Who makes your team? Let us know with the Brydens Lawyers NSW Blues Team Picker for the chance to win some great prizes, including tickets to Game One of the 2022 Ampol State of Origin Series.