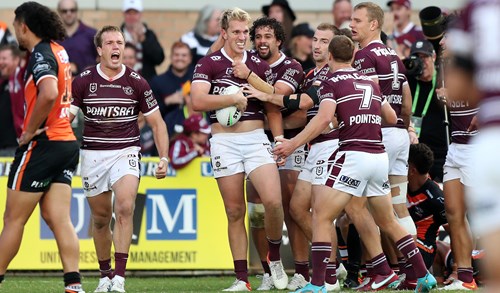 Tedesco wasn’t finished when he crossed for his 100th career try to open the scoring on Saturday night, going on for a hat-trick against the Titans as the Roosters surged back into form.

The Brydens Lawyers NSW Blues captain also had two line-breaks and a line-break assist, made 10 tackles busts and ran for 226 metres.

Penrith’s bustling winger could have been forgiven for easing back into his work after a long stint on the sidelines, but that was quite the opposite as To’o proved more than ready for the ‘Battle of the West’ – posting a game-high 266 run metres (104 from kick returns).

That yardage included a line-break and three tackle busts in a strong return for To'o, who also made 12 tackles with just one miss.

It may have been unusual to see Garner starting in the centres for the Tigers, yet despite being on the losing side at 4 Pines Park he looked right at home out wide.

Garner’s 49th-minute try was one of Saturday’s highlights when he showed a deceptive turn of pace from long range before getting around Tom Trbojevic to score. He accompanied that try with 152 run metres, two tackle busts and 16 tackles.

Talakai, among many other Sharks, needed to take on some extra work in Round Nine having played with at least a man short for over an hour against the Warriors.

He recorded a try assist and line-break assist, seven tackle busts, 193 run metres and 90 of those post-contact.

Last year’s top point-scorer was back on his preferred left wing with return of Tom Trbojevic, so it wasn’t too surprising when Garrick went in for a double in game where the Sea Eagles clicked back into gear.

With Jack Wighton unavailable, Frawley had no problem taking the reins at No.6 and played a starring role in the Raiders’ return to winning ways, as the club celebrated their 40th year.

Frawley not only scored a try in the 30th minute on Friday, but ran for 81 metres with a line-break and two tackle busts, kicked for 393 metres with two forced drop-outs, and made 11 tackles.

While the Sharks were facing potential defeat with 12 on the park and a four-point deficit, the No.7 steered them to one of the club’s most memorable victories and kept up the form that has placed him firmly in Origin contention.

Hynes scored the opening try against the Warriors and converted four from five off the boot and slotted a field goal, produced two try assists and line-break assists, had five tackle busts and ran for 164 metres. He also threw five offloads, tallied 393 kick metres with four forced drop-outs, and made 15 tackles with no misses.

The Eels' upset win over the Panthers had many foundations but Paulo was among the leaders in that department during his 61 minutes on the field.

The cagey prop made 23 runs for 207 metres, topping the Eels in doing so, with his 30 receipts also the best among Parramatta’s forward pack. The incumbent in the Brydens Lawyers NSW Blues front-rower was a constant menace with three off-loads, three tackle-breaks, 62 post-contact metres and 26 tackles.

It’s hard enough being a hooker when numbers are evenly split, but playing 12 on 13 – 11 on 13 for 10 minutes in the second half – the No.9 needs to dig deep and Brailey did just that against the Warriors.

His five dummy-half runs targeted tiring Warriors forwards, and his two line-break assists plus a try assist led to points. Brailey was everywhere on Sunday and needed to be, having 142 receipts and making 33 tackles.

His club isn’t getting the wins but that doesn’t stop Klemmer from trying his heart out.

In another beaten side Klemmer shone for his second TOTW nomination with 17 runs, 181 metres with 76 post-contact, three offloads, a tackle bust and 27 tackles - missing none.

He may well follow older brothers Tom and Jake into an Origin jersey down the track if his performance against the Wests Tigers is anything to go by.

After training all week at centre in the No.3 jersey, Trbojevic slotted into the second row after the late withdrawal of Haumole Olakau'atu (illness) and did not look out of place. He scored two tries, had a line-break, a try-assist and two tackle-busts, made eight hit-ups and 24 tackles, missing only one.

That’s back-to-back TOTW selections for the Brydens Lawyers NSW Blues back-rower. He was tireless in defence with 33 tackles and missing none, in another 80-minute performance.

But coupled with what he can do in attack Crichton is a headache for edge defenders. He had two offloads, four tackle busts, and 59 post-contact metres off his 13 runs for a total of 128 metres.

This nuggety middle-man was another relentless worker at the weekend, especially in the circumstances the Sharks found themselves.

Over 64 minutes McInnes made 19 runs for 159 metres – 69 of those post-contact – along with two tackle-busts. He also topped his Sharks teammates for tackles, making 39 without missing any.

McInnes becomes the third Sharks player in this TOTW based on the lion-hearted effort by the boys in the Shire.

Who makes your team? Let us know with the Brydens Lawyers NSW Blues Team Picker for the chance to win some great prizes, including tickets to Game One of the 2022 Ampol State of Origin Series.