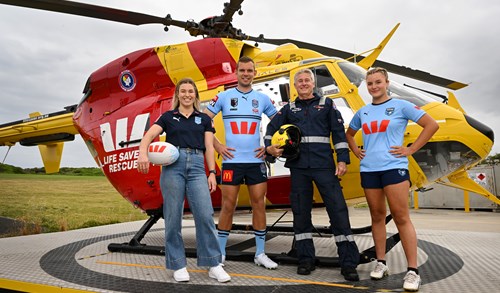 The NSWRL is pleased to announce a new partnership with Westpac that will see them take over the naming rights of the NSW Blues and feature on the front of the iconic Blues jersey until the end of 2026, in a deal that will celebrate diversity and inclusion in sport.

The partnership, which provides equal financial support for programs promoting the men’s and women’s game, means Westpac will play a key role in supporting female participation pathways and other NSWRL initiatives. This includes the inaugural Westpac Junior Sky Blues Academy for teenage girls aspiring to play NRLW and State of Origin.

The partnership was announced today at Ignite HQ Centre of Excellence, with True Blue Tom Trbojevic and NSW Sky Blues star Emma Tonegato arriving for the event in the Westpac Life Saver Rescue Helicopter. Westpac will also donate $5,000 for every NSW try scored in both the men’s and women’s 2023 State of Origin series to assist the rescue service with their valuable lifesaving work.

“Westpac and NSW Rugby League are two organisations that are such huge parts of the lives of Australians across the State,” NSWRL Chief Executive David Trodden said.

“We know everyone at Westpac shares our passion for the development of the game across NSW, and we’re looking forward to working closely with them to achieve this from Origin to our grassroots Academy programs.

“I would also like to thank Brydens Lawyers for their tenure since 2018, with their support helping the Blues win three of the past five State of Origin series.

“I am confident that the success we have enjoyed will continue into the future, and I look forward to watching the Westpac NSW Blues return the Origin Shield to NSW next season.”

NSWRL Chief Commercial Officer Jodie Cross said there was a strong symmetry between the NSWRL and Westpac as they were both iconic brands.

“We are thrilled to welcome Westpac into the NSWRL family, and we are excited about their support and interest in pathways for women’s Rugby League,” Cross said.

“Female participation is one of the fastest-growing areas in our game and we are looking forward to bringing that to life in the new Westpac Junior Sky Blues Academy initiative.”

Westpac Group Chief Customer Engagement Officer Ross Miller said: “Sport is for everyone, and that’s why we’re so proud to provide equal financial support to the men’s and women’s game through this partnership.

“For more than 205 years, Westpac has been supporting customers and communities across NSW. This partnership is about the future, particularly the development of the next generation of female Origin superstars through the Westpac Junior Sky Blues Academy. We’re excited to work closely with NSWRL to reach more communities across the state and spread that message of inclusion and participation.”

The Westpac Junior Sky Blues Academy aims to develop the next generation of female stars after providing 40 scholarships to girls aged 14-16.

Metropolitan players will take part in weekly training sessions over a six-week period, while a weekend camp will be held for regional players, both at Ignite HQ Centre of Excellence.

The new jersey for the Westpac NSW Blues is expected to be available for purchase next month.