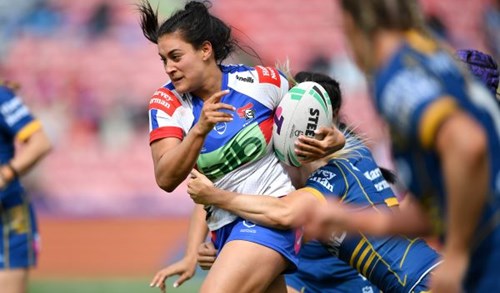 Harvey Norman NSW Sky Blues Yasmin Clydsdale has nominated Sydney Roosters halves Raecene McGregor and Zahara Tamara as the two players she must help shut down as the Newcastle Knights venture to Allianz Stadium this Sunday for the top-of-the-table NRLW clash.

Clydsdale knows one or two things about the Roosters danger women having been a part of the Roosters 2021 Premiership-winning side.

Both the Roosters and Knights are undefeated after three rounds with the Tricolours in top spot with a better for-and-against.

“It is going to feel a little bit strange coming up against them but I’m also super-excited to be facing the old team,” Clydsdale said.

“They are a well-polished team, well-drilled, but we need to focus on our game as well as a Knights unit.

“There will be a big focus on defence especially shutting down their halves Raecene and Zahara – that will be one of our key focus points.”

Tamara is the leading points scorer in the NRLW so far with McGregor having the highest number of line engagements across three games.

Clydsdale said the Knights had been buoyed by the fact they grabbed the win against Parramatta last round after being down 6-4 at half-time, and 16-12 with three minutes left. A last-minute try by Olivia Higgins and Kirra Dibb’s conversion sealed the comeback for the Knights.

“Even when we were down with five minutes to go there was a secret confidence that we were going to win,” she said.

Clydsdale, who married former NRL player Adam Clydsdale a week after the Roosters premiership win on 10 April, enjoyed two seasons at the Bondi Junction club before moving north closer to home. She is a schoolteacher at Scone in the Hunter Valley.

“The culture that runs through here (Knights) is really important and really special,” Clydsdale said.

“Even having my dad clapping me out onto the field last weekend on Father’s Day was really special and something I’ve never experienced before.

“For the Knights to realise how important that was for us girls, just goes to show the culture here.”

With both the Knights and Roosters enjoying 3-0 starts to 2022, someone will be disappointed this Sunday.

“I think we’re all just looking forward to playing more games like this,” she said.

“We seem to be building still so the more games we play the better we’ll be in the future.

“It was really good to see that we could come back from falling behind. That shows a bit of character and grit about us as a team.

“It’s good to have that right now – since it’s such a short season – that when those semi-finals come around, we’re able to do that.

Sunday’s round four match-up is at the brand-new Allianz Stadium.

“It will be a great atmosphere – surreal - especially playing before a men’s Elimination Final (Roosters v Rabbitohs) at the new stadium. I’ve heard it’s loud and big and beautiful.”