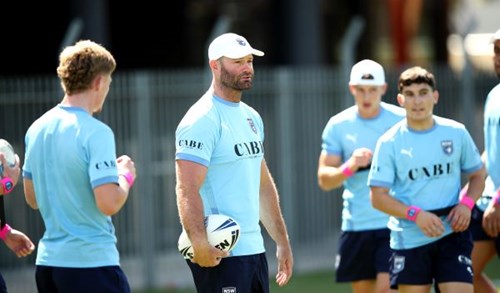 True Blue Boyd Cordner had been more than comfortable with his decision to retire two years ago – until he saw the 2022 Ampol State of Origin series unfold this year.

“I’ve always been sweet with my decision but the only one time it really hurt was the last Origin series – that really got to me,” Boyd told nswrl.com.au.

“I just missed it a bit too much to my liking, as I’ve been enjoying my involvement with the game elsewhere.

“But that’s the competitor in me that will never die.”

Cordner, 30, has a coaching role at the Sydney Roosters NRL for 2023. He retired from the club in after 181 games over health concerns.

“(Roosters coach) Trent (Robinson) has been unbelievable with the patience and the freedom he’s given me to relax a bit more since I hung up the boots (Week Two of NRL finals 2020),” he said.

“I’ve had two years to unwind and do some things for myself.

“I’m keen to work now. I’m looking forward to doing a bit more anywhere I can.”

That increased presence at the Roosters could easily trickle into helping the NSW Blues.

“The jersey and this arena has done a lot of me so anything I could do I’m happy to put my hand up for ‘Freddy’ (NSW coach Brad Fittler), he said.

Fittler has already reached out for Cordner’s expertise, asking him to help train some of the brightest players across the state in the CABE Junior Blues camp at NSWRL’s Ignite HQ Centre of Excellence.

Cordner put the forwards through their paces and then joined in a Q&A with Fittler and fellow True Blue Tom Trbojevic on how to combat expectation, injury, as well as how to balance Rugby League with personal commitments.

“It’s a re-vamp style of the Emerging Blues, normally it was fringe first-graders,” Cordner said.

“Now with the Junior Blues it’s an opportunity – another pathway - for all the young kids around country NSW to join with city kids – all the players showing promise across the state – to get a glimpse of what it’s like to be not just a NRL player but an Origin player.

“I jumped at the opportunity when Freddy rang me up, to come and share a bit of knowledge.”