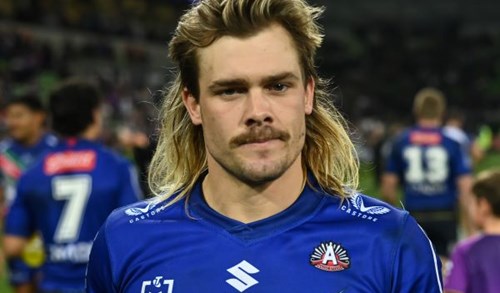 Former NSW Blues coach Craig Bellamy believes his club fullback Ryan Papenhuyzen deserves to be in the Origin team but not at the expense of incumbent No.1 James Tedesco.

Papenhuyzen picked up the Anzac Medal after another top-notch performance for Melbourne Storm in the 70-10 victory over the Warriors on Monday night at AAMI Park.

The instinctive and elusive No.1 has 10 tries from seven games this year. He also has six try assists, six line-breaks, and 20 tackle-busts.

Bellamy said his 23-year-old speedster has been “knocking on the door” for a couple of years now.

But he acknowledged former Dally M winner Tedesco had the pedigree to keep his place.

“It’s a pretty tough one for me to answer as I’d love to see (Papenhuyzen) in there and I think he deserves to be there,” Bellamy said after the Warriors game.

“Last year we were really made aware of how many great fullbacks we have eligible to play for NSW. And I thought ‘Paps’ would be a chance last year to perhaps go in on the bench.

“It’s up to the selectors and you can see both sides.

“But one thing I will say is that he can’t do any more than what he’s been doing to keep knocking on the door. Hopefully he’ll get a start there at some stage.”

Papenhuyzen along with Nicho Hynes and Jack Wighton are all in the fight for that No.14 utility jersey in the Brydens Lawyers NSW Blues team for the Ampol State of Origin opener at Accor Stadium on 8 June.

Papenhuyzen was in NSW coach Brad Fittler’s extended squad in 2020 but had recurring concussion issues in 2021 after a head knock in Magic Round.

The Dundas Shamrocks junior said he had put on a bit more muscle in the 2022 pre-season without making any concerted effort to bulk up.

“But I think I’ve taken the pressure of myself to try to do it – it just naturally happened,” Papenhuyzen said.

“I’m a bit older now, and I’ve been in this (Storm) system a few years, so it was just getting into a routine. With all of that - gaining a bit of weight has helped.

“It’s just given me a bit more confidence.”

As for the possibility of gaining an Origin bench spot this year, Papenhuyzen said: “I haven’t really thought about it too much to be honest.

“It’s a pretty special club here in that you feel valued regardless of what teams you make.

“So, I’m grateful for that and I haven’t thought about Origin to be fair. That’s probably a good thing.

“You play good footy and you can get picked in those sides.”