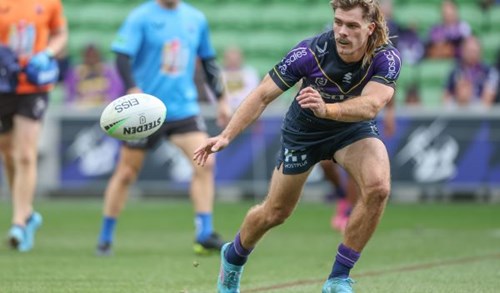 The State of Origin hopes of Ryan Papenhuyzen have been dealt a blow with the Melbourne Storm fullback now expected to miss up to six weeks with a torn hamstring and knee injury.

Initially it was thought Papenhuyzen’s hamstring and knee strains would only sideline the 23-year-old for two to three weeks, giving him a fighting chance to make the Brydens Lawyers NSW Blues for Game One at Accor Stadium, Sydney On June 8.

But a statement from the Storm today said scans confirmed Papenhuyzen sustained a left hamstring tear and a PCL (posterior cruciate ligament) injury in his knee during Sunday’s 42-6 win against the St George Illawarra Dragons at AAMI Park.

“Papenhuyzen is expected to be off the field for around four to six weeks,” the club said.

On that time frame Papenhuyzen should be available for Origin II in Perth on 26 June.

The injury continues a rotten run of luck for Papenhuyzen who was selected in the Blues extended squad in 2020 but missed the chance to play in the opening games through injury.

He was in line for selection again last year but ended up missing the entire series after suffering a serious concussion in the NRL’s ‘Magic Round’.

Papenhuyzen has again had a sensational start to the season – 12 tries in nine games, six try-assists and 31 tackle-busts.