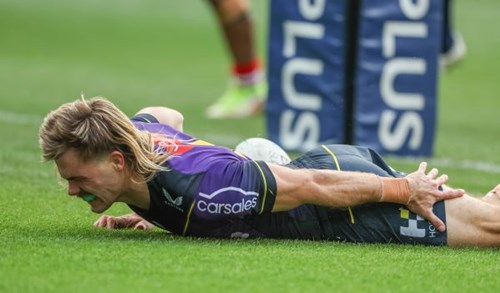 Melbourne Storm fullback Ryan Papenhuyzen will use the next few weeks to get his hamstring, knee and a niggling ankle right as he remains in the frame for a spot in the Brydens Lawyers NSW Blues team for the opening game in Sydney on 8 June.

NSW coach Brad Fittler finalises his team after Round 12, giving Papenhuyzen three weeks to rehab the injuries aggravated in the Storm’s 42-6 win over the Knights at AAMI Park on the weekend.

It will be a race against the clock, but the 23 year-old said he was up for the challenge.

Papenhuyzen was in the NSW Blues extended squad in 2020 but missed the first two games through injury. He is in line for a bench spot this year after a sensational start to the season – 12 tries in nine games, six try-assists and 31 tackle-busts.

“I have a little hamstring tear,” Papenhuyzen told Fox League on FOX SPORTS on Sunday.

“It’s not ideal. The silver lining is I have a few niggles I need to get to right. I will have a break now and get all of those right.

Storm coach Craig Bellamy is resigned to losing his fullback for the highly-anticipated match against premiers Penrith Panthers for the NRL’s Magic Round at Suncorp Stadium on Saturday night.

“He’s got a couple of injuries to deal with so we’re going to have to find ourselves a fullback for the next couple of weeks,” Bellamy said.

“We’ve got a couple of big games coming up, obviously Penrith and the Cowboys both away… we’ll have a think about it during the week.

“I’ll obviously consult the players in key positions and see what they think about it.”