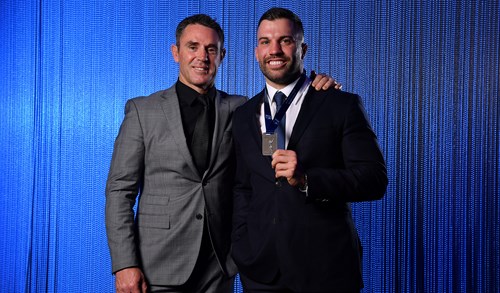 Brydens Lawyers NSW Blues captain James Tedesco had barely allowed enough time to let it sink in that he made history at the 2022 Brad Fittler Medal on Monday night before his attention had shifted to restoring NSW to Origin glory.

Tedesco became the first player to take out all three major awards for the NSW Blues in the same season after his efforts in this year’s Ampol State of Origin Series – the Brad Fittler Medal, True Blue Award, and Daily Telegraph People’s Choice Award.

Receiving the Brad Fittler Medal from his NSW coach also marked the third occasion Tedesco has won the Blues’ top honour (2018, 2019, 2022), and his first as captain; only reinforcing his remarkable consistency at Origin level despite NSW falling short in the decider at Suncorp Stadium.

“It’s obviously an honour to be recognised,” Tedesco said.

“It was a disappointing series but to be rewarded with a few personal awards is nice.

“You don’t play for individual awards, you just do your best every game and that’s what I pride myself on, especially now as captain.

“I want give 100 per cent effort every game and do the best I can do, and looking back it’s nice to be rewarded but the ultimate reward is winning (the series).”

There’s little wonder Tedesco puts his effort above anything else with a glance at his figures in 2022, averaging 37 receipts (including 26 runs), 281 run metres with 75.7 post-contact, and eight tackle busts across all three matches. The Blues relinquished the Shield to Queensland after narrowly losing the decider to go down 2-1 in the series.

It’s that effort area of the game where Tedesco – now six games into his captaincy tenure – leads by action, and he was full of pride to earn the medal which is determined by the NSW playing group.

“I want to be a player that everyone wants to play with, the Brad Fittler (Medal) is voted by the players and that’s cool,” Tedesco explained.

“I’m really proud to be voted by them.”