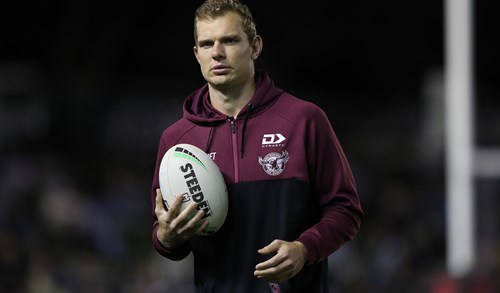 True Blue Tom Trbojevic has had another injury setback on his troubled hamstring after the Manly Warringah Sea Eagles confirmed he had suffered a grade two tear and was facing up to eight weeks on the sideline.

Trbojevic wasn’t able to complete a field session on Wednesday and had scans on the leg muscle on Thursday. The club issued a statement today about the extent of the injury.

“An MRI confirmed a Grade 2 hamstring (tear) with an expected recovery time of 6-8 weeks,” the statement said.

It’s another injury blow for the 26-year-old, who told nswrl.com.au at last month’s CABE Junior Blues camp that he was back doing full-contact and training five days a week with the Sea Eagles after surgery to his left shoulder last May.

That injury reduced his 2022 season to just seven games, forcing him to miss the Ampol State of Origin series and Manly’s back-half of the season.

“I’m a very motivated guy, I love Rugby League and I just wanted to get back playing it as soon as I could,” he said.

Hamstring strains are not new to Trbojevic. He only played seven games in 2020, and then suffered another hamstring tear during the off-season, which delayed his start to the 2021 until Round Six.

Trbojevic made up for lost time by scoring 28 tries in 18 games - alongside 28 try assists – which went a long way to earning him the Dally M Medal, the RLPA’s Players Champion, the Wally Lewis Medal, and the Brad Fittler Medal.