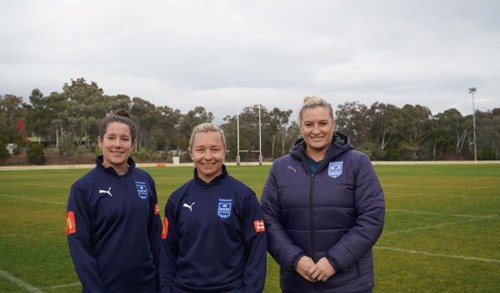 The NSWRL will be creating a piece of history in Canberra this week, when three female coaches take charge of an Origin team for the first time.

The Harvey Norman NSW Sky Blues team, who are out to reclaim the Origin shield off Queensland in 2022, are led by coach Kylie Hilder, with her two assistants Ruan Sims and Kate Mullaly.

Mullaly, who coached the NSW City Under 19s side at the Women’s National Championships at the Gold Coast a fortnight ago, came into the Sky Blues camp at the weekend as his replacement.

NSWRL Chief Executive David Trodden said the significance of having three women in charge of an Origin team could not be overstated.

“Kylie was appointed to her role in early 2021 because she was the best person for the job,” Trodden said.

“It had been a concern of ours that talented coaches and leaders like Kylie were previously not being provided with opportunities, which should have been available to them, and that situation needed to be corrected.

“Women are an essential and growing phenomenon in our game. Player registrations for girls and women keep climbing each year in all parts of our state.

“And we want female coaches and officials to see a career within Rugby League as the players do. Kylie, Ruan and Kate are leading the way for an exciting generation of coaches who will take our game to new levels.”

Hilder, Sims and Mullaly all graduated in April this year from the joint NSWRL-UNE (University of New England) Women in Sport Leadership Program.

Hilder said none of her coaching team in 2022 set out to be groundbreakers.

“We just love the game and yet here we are,” Hilder said.

“Maybe it is time to think of women as fully accredited and experienced coaches of elite sporting teams like Rugby League.”

Hilder has a long association in both playing and coaching in the 13-woman game.

She played in the Interstate Challenge and later in two Origin matches – 2019-2020 – before being appointed the NSWRL’s first female Origin coach for the 2021 Ampol State of Origin.

Currently she is assistant to coach John Strange with newly-crowned NRLW Premiers, the Sydney Roosters.

She was also assistant coach to the Central Coast Roosters in the NSWRL’s elite women’s state competition, the Harvey Norman NSW Women’s Premiership, in 2020 and 2021 (Minor Premiers).

Mullaly was assistant to Blake Cavallaro, the Sydney Roosters pathways coach, who guided the NSW Under 19s to victory 16-12 over Queensland at the Sunshine Coast in June 2021.

Mullaly was set to again help Cavallaro at Leichhardt Oval this week before Soward’s positive test.

As a player Mullaly was a member of the NSW City team that beat NSW Country in 2019. She enjoyed four seasons with Cronulla-Sutherland Sharks in the Harvey Norman NSW Women’s Premiership.

Currently Mullaly works as a wellbeing and education officer at the Wests Tigers and is assistant NRLW coach with the Parramatta Eels.

Sims, OAM, is a dual international with the Wallaroos and Jillaroos, and has been Hilder’s Sky Blues assistant for two years.

She is a former NSW captain playing six times (2012-2017) in the Interstate Challenge, as the annual battle with Queensland was known before being re-branded to State of Origin in 2018.

Sims also has the distinction in 2016 of becoming the first professional women’s Rugby League player when her then club Cronulla-Sutherland Sharks signed her to a contract.

She finished her playing career with the Sydney Roosters (2018-2019) being part of the first two seasons of the inaugural NRLW.