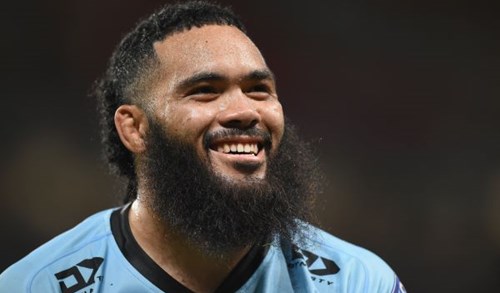 True Blue Siosifa Talakai has inked a contract extension with Cronulla-Sutherland Sharks which will keep him at the club until the end of 2026.

The hulking centre had a breakthrough season in 2022 which saw him cement a spot in the Sharks starting side, make his debut for NSW and represent Tonga at the World Cup.

“I’m very grateful for the opportunities the Sharks have provided me to this point and really excited to be extending my contact and remaining at the club for the next four years,” Talakai told sharks.com.au.

“I enjoy a close bond and have great friendships with my teammates and coaching staff which played a part in my decision to re-sign and with the quality of the players we have I believe we can do something special here at the Sharks next year and in the years ahead.”

Talakai played a key role in the Newtown Jets premiership win in the NSW Cup in 2019 which helped land him a deal at the Sharks for 2020. He played 21 games this season for seven tries, nine try assists, nine line breaks and an average of 176 running metres per match.

He was called in to make his debut for the Blues for Games Two and Three of the Ampol State of Origin series where he had limited time off the bench.