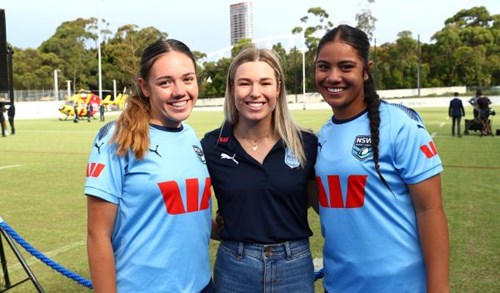 The banking industry giant has announced a four-year sponsorship of the NSW Blues men’s team and the Junior Sky Blues Academy for teenage girls – both having the Westpac logo on their jersey fronts.

The women’s Origin team will also have the Westpac symbol on a corner of their jersey in 2023.

The bank said it would provide equal financial support for programs promoting the men’s and women’s game.

“Westpac putting some of the money into pathways is just going to strengthen the women’s game as a whole,” Tonegato told nswrl.com.au.

“I met a girl today here at the launch – Lacey (Cross) – and she’s just 15 but already training with the Junior Sky Blues and gathering experience.

“It’s really exciting to see what her future will be like.”

The women’s game is one of the fastest growing areas within the NSWRL.

“It’s massive; I was speaking to one of the Westpac officials and he was just so passionate about women’s Rugby League,” Tonegato said.

“So, to grow the game it’s very special to have somebody on board like that.”

The Tarsha Gale Cup for Under 19s started in 2017 and helps feed players into the Harvey Norman NSW Women’s Premiership, which eventually leads to the NRLW.

This year 61 per cent of NRLW players came from the NSW Women’s Premiership and of that, 45 per cent came through the Harvey Norman Tarsha Gale Cup.

In 2023, the Tarsha Gale competition will increase to 13 teams with the inclusion of the Manly Warringah Sea Eagles.

Also next season, the NSW Women’s Premiership increases to 10 teams, with the addition of the St George Dragons, Illawarra Steelers and return of the Canterbury-Bankstown Bulldogs.