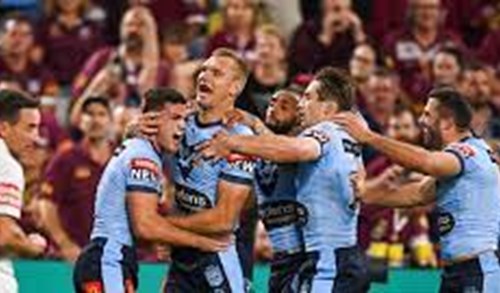 Westpac NSW Blues squad members Tom Trbojevic and Ryan Papenhuyzen will be the beneficiaries of working with injury experts in the United States this month, through good research by their respective clubs Manly Warringah Sea Eagles and the Melbourne Storm.

Certainly, the experience of fellow True Blue Latrell Mitchell last year at the same facility in Philadelphia was a contributing factor to both fullbacks seeking guidance for ongoing knee and hamstring issues.

He was initially recovering from left shoulder surgery that cut short his 2022 season at Round 11 forcing him to miss the 2022 Ampol State of Origin series. But then the 26-year-old strained his hamstring in pre-season training last month.

“He would be available to play Round One (Bulldogs, Saturday 4 March) regardless of going to the USA,” Seibold said.

But the connections within Seibold’s staff suggested a visit to Knowles would be helpful.

“A consultant to our club Paul Devlin has had a relationship with Bill Knowles from about 10 years ago and he was the one who suggested it,” Seibold said.

“I also called Luke Annesley from the Bunnies (South Sydney Rabbitohs), who is their physio, to check out how it all went with Latrell.”

Papenhuyzen (knee) is already in the US receiving tutelage from Knowles. That connection also goes back more than seven years.

“Craig (Bellamy) and I visited Bill Knowles at his practice in Philadelphia in 2015 so we have known him for a while,” Ponissi told nswrl.com.au

“He impressed us back then and we’ve followed his work ever since.

“However, it was definitely our Head of Performance Lachlan Penfold, who drove this project with Paps a number of months ago, so he deserves the full credit. Lachlan had worked with Bill in the past,” Ponissi said.

Papenhuyzen is expected back in Melbourne for the final weeks of pre-season training in time for the second week of Melbourne's annual pre-season camp in Geelong.

There are no guarantees the lightning quick fullback will take the field in their opening game against Parramatta on Thursday 2 March though.

Papenhuyzen has been sidelined since picking up a knee injury against Canberra in July, while Trbojevic suffered a Grade 2 hamstring strain at training in December with a two-month recovery period expected.

The star fullback was otherwise progressing well from shoulder surgery that cut his 2022 season short and remains on track for the season opener against the Bulldogs on 4 March.

Their fitness and recouperation will be closely watched by Westpac NSW Blues coach Brad Fittler.