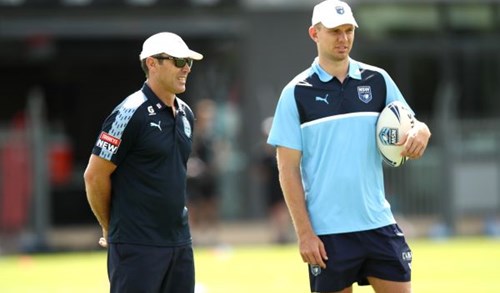 It’s not surprising to hear what True Blue Tom Trbojevic wants for Christmas.

“An injury-free season would be nice,” he told nswrl.com.au at the CABE Junior Blues camp last weekend.

Trbojevic looked in good order after overcoming shoulder surgery which restricted him to just seven games for the Manly Warringah Sea Eagles in 2022 – the same number of games he played in the 2020 season after tearing his hamstring.

He’s played eight games (nine tries) for the Blues since 2018 but missed the entire 2020 and 2022 series through injury.

In between those horror years, there was a remarkable 2021 season (18 games and 28 tries) which saw him win the Dally M Medal, RLPA Players’ Champion awards, the Brad Fittler Medal, and the Wally Lewis Medal.

“That’s the plan, I get these questions all the time, but I’m focused on playing every game for Manly this year and pulling on a rep jersey as well,” Trbojevic said.

“I’m feeling good. It was a very disappointing year last year. But wipe that and move forward.”

That’s not to underestimate how hard it was to miss the 2022 Ampol State of Origin.

“It was tough to watch Origin and not be amongst it… it was like that for Manly as well,” Trbojevic said.

“Unfortunately, that’s how the year went for me – it’s (injury) part of the game.

“But I’m feeling good, back at training, and looking forward very much to 2023.”

Trbojevic is back doing full-contact and training five days a week with the Sea Eagles.

“I’m a very motivated guy, I love Rugby League and I just wanted to get back playing it as soon as I could,” he said.

He was also excited to be asked by Fittler to help mentor the Junior Sky Blues.

“State of Origin is such a big part of our game and being part of NSW is really special,” Trbojevic said.

“The camp is part of the pathway in showing the younger players what NSW is all about. It will help motivate them to keep striving to reach that top level.”