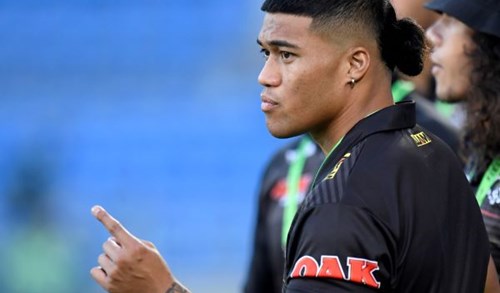 Lewis told this week’s edition of Behind Blue Eyes To’o warrants a return straight into the starting side because of his previous achievements for both the premiers and the Brydens Lawyers NSW Blues.

The powerhouse winger garnered immediate cult hero status when he scored two tries on debut in Origin I last year, helping to set up the 50-6 win at Queensland Country Bank Stadium in Townsville.

The Samoan international played all three games in the Ampol State of Origin series win by the Blues and was an integral part of Penrith’s Grand Final-winning side.

That leaves Cleary to decide who to retain on the opposite wing - Taylan May or Charlie Staines - when the Panthers host the Eels in the ‘Battle of the West’ at BlueBet Stadium.

“It’s a tough one but you can’t leave Brian To’o out because I believe he’s an absolute superstar,” Lewis said.

“Look for me Charlie Staines is playing very tough, but Taylan May is just an X-factor. He scores tries at will and gets involved a lot.”

May hasn’t wasted a second of his chance in the NRL this season with eight tries from six games, 31 tackle-busts and six line-breaks.

“I’m not the coach and I’m glad I’m not sitting in Ivan Cleary’s shoes having to make this decision,” Lewis said.

“But I’d be putting Brian To’o straight back on the wing where he was before and leaving Taylan May out there. Charlie Staines might be the one to miss out – but it’s a good problem to have for Penrith.”