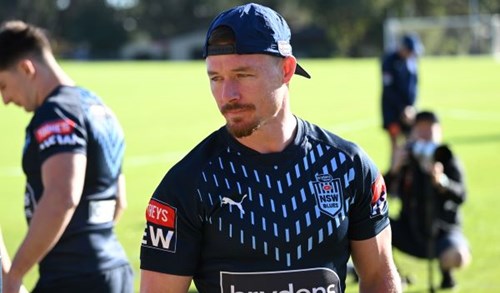 Damien Cook has a philosophy when it comes to pulling on the sky blue jumper for the Brydens Lawyers NSW Blues.

“You borrow the jersey and you want to leave it in a better position than you found it,” Cook told nswrl.com.au. “You come in here and give it your best, play your best footy, leave it at the door and get re-selected again.”

That philosophy is why Cook doesn’t have an issue with being selected on the bench for Game Two of the Ampol State of Origin series after 13 straight games in the No.9 jumper for NSW; with Apisai Koroisau named to start in his place.

“Whatever number I’m in I’ve just got to make sure I go out there and do the same thing, have the same mindset every time I take the field and whatever job I’ve got to do to help the team get the win.

“I look back at here, and back at club level, and your bench is very important now. You’ve got to look for an impact when you come on the field so that’s what you’ve got to make sure you do.

“I’m very confident that wherever the team’s at, we’re going to be in a great position, and we’ve got to come on and take it to another level.

“Whatever our job is we’ve just got to put the team first, get the win and take it to a decider.”

NSW Blues coach Brad Fittler told 100% Footy on Monday that he was keen to generate some speed around the middle of the field in Game Two after losing that battle to Queensland in Game One.

He said Koroisau could tap into the combinations with his Penrith teammates to speed play up from the kick-off, before injecting further speed into the match when Cook is brought in off the bench.

Cook said he was yet to talk tactics with the coach, or with Koroisau, but he was ready for whatever role he had in mind for him.

“I haven’t spoken to ‘Freddy’ (Fittler) yet about the strategy moving forward of what we’re going to do, or whatever he needs me to do, but I like to think one of my strengths is my running game.

“Wherever I can bring that in and take my opportunities I will, and other than that I’ve got to get other guys into position, give them good service and defend well with all the effort areas.

“We’re going into a must-win game so we’ve got to make sure we take it to them and give it our all.”