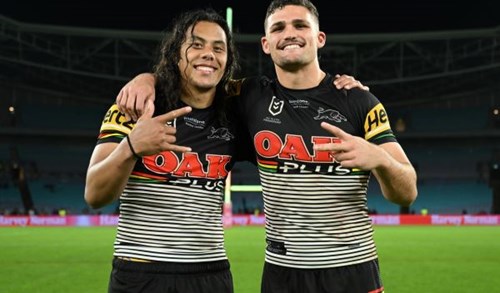 One of the keenest set of eyes watching Nathan Cleary go up against halves partner Jarome Luai in this weekend’s Australia-Samoa World Cup Final will be Penrith coach Ivan Cleary.

Cleary knows these two young playmakers the best and has been watching them since Luai was with St Marys and Nathan was with Penrith Brothers junior Rugby League clubs.

That was the last time the pair, both born in 1997, played against each other – back when they were 16.

In between are five Origin games together as No.6-No.7 for the Brydens Lawyers NSW Blues, 80-odd NRL games, and countless lower grade matches for the Panthers.

“Nat and Romey are a wonderful combination of Yin and Yang,” Cleary told nswrl.com.au.

“They are different in so many ways on and off the field, but a perfect marriage on it because of one similarity… being competitors.”

Cleary doesn’t believe there will be many nerves or anxiety generated by two best mates playing against each other on one of Rugby League’s biggest stages – a World Cup final.

“They are both winners because they are ultra-competitive, but they’ve always been team players first and foremost,” Cleary said.

“They will put friendship aside for 80 minutes to do what their team/nation needs.

“They’ve been great teammates since their junior days creating life-long memories (and hopefully many more) ever since.”

Cleary said he won’t feel conflicted watching this match-up, or the fact both the Kangaroos and Samoans have Penrith players involved: Cleary, Luke Martin and Isaah Yeo for Australia; Luai, Brian To’o, Stephen Crichton, Taylan May and Spencer Leniu for Samoa.

“I will just be happy to sit back with pride watching all the boys play in this World Cup Final,” he said.

“It will be a very proud day for us all at the Panthers watching eight of our boys who have all come through the Panthers junior system playing at the highest level all at once.

“It will benefit our team through the experience they will gain.”

Cleary said it was hard to pinpoint where each half might get the better of the other and why.

“Nat and Romey are very different players in technique and personality,” he said.

“But they do the fundamentals well - tackle, run, pass, compete - and those will be very important for their respective teams.”

Cleary was in the UK to watch Nathan’s Test debut against Scotland in the pool games, but has since returned to Sydney for pre-season commitments with the Panthers.